Has Mac McClung lost his hype? 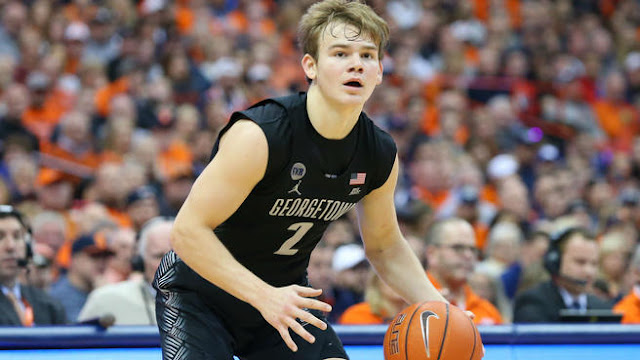 Zion Williamson and RJ Barrett are bringing showtime to Duke which makes everyone forget about the kid in Georgetown who earned his scholarhip through highlight reels.

That kid's name is Mac McClung.

The art of creating a basketball mixtape has helped scouts spot talent where it is less likely to be discovered.

McClung became a highlight reel for being a baby-faced assasin of high school basketball. His senior year mixtape, which Wellman crafted became his scouting video.

Wellman edited a minimum of 200 to 300 clips of McClung by the end of the season.

The compilation is a four-and-a-half-minutes long. The mixtape is filled with explosive dunks, crossovers, and celebrations.

The video amassed more than a million views real quick. The countless hours and days of editing paid off when the mixtape went viral.

“The most exciting player in America.”

BallisLife dubbed the Virginia teenager the "most exciting player in America."
“He’s such a freak athlete,” Wellman said. That was until the Zion hype blew up college basketball.

McClung and Williamson pretty much have a lot in common. Insane athleticism, huge potential, and a dominant high school career. Both also happen to come from small towns.

While the latter chose the program in Duke, McClung decided to commit with Georgetown.


Has McClung lost his hype?

The blowout loss has now raised the question: Has Mac McClung lost his hype?

The Gate City, Virginia native was already an internet sensation upon arrival to Georgetown.  The popularity of his mixtape on social media made him well known beyond Gate City's population of 2,000 people.

The problem is that the McClung mixtapes have lessened, while the Williamson ones became a walking highight reel in the ACC division.

The Big East Tournament would have been the perfect opportunity for the Georgetown freshman star to step up but they got eliminated early.

Despite that McClung averaging only 13.4 points, 2.6 rebounds, and 2.0 assists per game, he was named to the Big East all-freshman team.

The mixtape-worthy highlights were no longer there. Just a few jumpshots and simple breakaway slams is what we got from McClung this season.


Will McClung bounce back stronger?

It is not certain yet what path McClung will take. Will he be another one-and-done and turn pro or will he stay in college and put time into his own development?

His potential still happens to be a gray area at the moment. Although he has still shown that he can create, his adaptation to the college game is a red flag for scouts this 2019.

With Duke's freshmen all likely to declare for this year's draft, McClung's chances might slim down with most eyes focused on WIlliamson and Barrett.

Unless a team promises to invest all financial assets into McClung's training and development in the pros, it might be best to stay in college for the moment.

It will take a Giannis Antetokounmpo-esque type of investment by a team to develop someone like McClung.

What do you think about Mac McClung's game? Is he ready for the NBA? Leave a comment and let us know your thoughts.