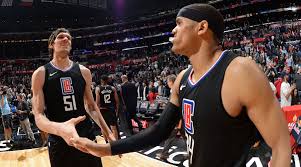 The LA Clippers just did the unthinkable when they traded Tobias Harris to the Philadelphia 76ers.

The multi-player deal includes Harris, Boban Marjanović and Mike Scott for Wilson Chandler, Mike Muscala and Landry Shamet. A number of future draft picks were moved in the process as well.

76ers GM Elton Brand is happy with the trade saying  “We are in the unique position to contend now and we think this trade positions us well for the postseason.”

Harris has been a centerpiece for a Clippers team that are performing beyond expectations. The Sixers are surely going to be deeper now that Harris is on board.

The Clippers are in good standing this season which is why it came as a surprise that they traded Harris. It's too late for tanking if that is what the this LA team is going for.

They also let go of fan favorite Marjanovoic who provides a solid brick wall in the paint for them.

The move actually helps them develop their current talent pool as it forces rookies Shai Gilgeous-Alexander and Jerome Robinson to step up whenever veterans Lou Williams and Danilo Gallinari are off.

Forward-Center Montrezl Harrell has been a revelation for the team this season. Trading Harris and his 7.9 rebounds per game frees up space underneath for Harrell to grab all the boards.

It's still a mystery why the Clippers would trade an asset such as Harris when they could have invested and built around the underrated forward.

The Sixers has felt the Jimmy Butler effect the moment they traded for him. It is obvious that they won in that trade with Minnesota.

They happen to score another victory in this one as adding Harris to their lineup boosts their efficiency as long as he plays well alongside Butler, Embiid, Simmons, and Redick.

As an individual, Harris has been an efficient player with the Clippers as he carried what was supposed to be a bad team to 8th place in the Western Conference as of the trade.

Harris' attitude towards the game of basketball will surely make a very vocal Butler happy to be sharing the court with him.

Let's just hope this new superteam in Philly will take them deep into the playoffs.

Did the Clippers make a mistake in trading Harris? What can you say about the Sixers' winning another trade? Leave a comment and let us know your thoughts.