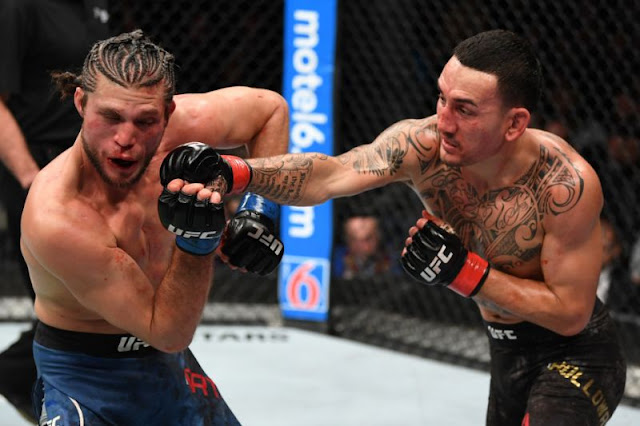 UFC Featherweight champion Max Holloway is starting to earn his reputation as one of the most efficient strikers in UFC history.

Challenger Brian Ortega absorbed a lot of punishment from the champion as he tried to look for that one big shot, similar to what he used to knock out Frankie Edgar back in March.

Unfortunately for "T-City," Holloway came peppering him with strikes, landing a whopping 290 significant strikes on Ortega. 134 of those strikes were landed in the fourth round alone, setting a new UFC record.

Saturday's win over Ortega puts Holloway's win streak to 13 fights. Holloway has continued to improve with each succeeding MMA fight, especially when he started being put in the mix for a title shot.

It all started in his first fight with Jose Aldo for the featherweight title.

The then challenger looked so calm and showed composure as he waited for his moment to strike. The rematch had the same result as Holloway, now the champion successfully defended.

In his fight against Ortega, Holloway looked very confident from the opening bell. He set the pace, not thinking that his opponent might be baiting him for a big shot.

The champion looked confident as ever as he becomes increasingly dominant with every fight.

Holloway has delt with health issues twice in the past. The first was understandable due to the repercussions of a possible weight cut on short notice while the second was when he suffered "concussion like symptoms."

While moving up in weight class is still a huge possibility, some issues must be cleared first with regards to the controversy surrounding the current UFC Lightweight champion.

The featherweight champion even joked about a move to heavyweight to fight Daniel Cormier in his post fight interview but it is unlikely that it would ever happen.

He wants to do one fight in his hometown of Hawaii though that is for sure.

What do you think about UFC 231? Leave a comment and let us know your thoughts on the card.