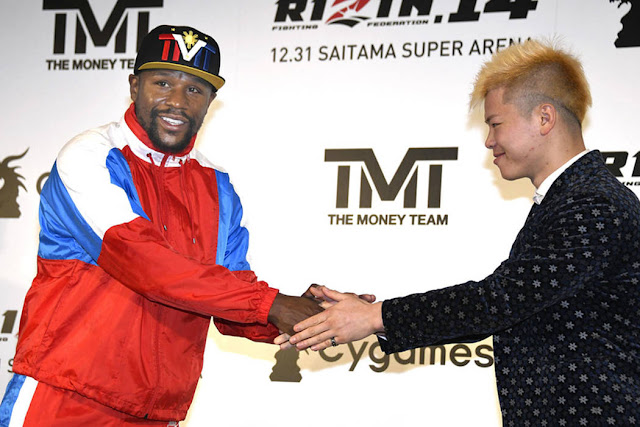 Floyd Mayweather Jr. is taking his talents to the world of Mixed Martial Arts as he plans to fight Japanese Kickboxer Tenshin Nasukawa.

The undefeated boxer plans to makes his pro MMA debut at Rizin 14 on December 31, in Saitama. This will be the first time Mayweather will be fighting under MMA rules.

The 41-year old Mayweather shocked the world when he announced that he was coming out of retirement. What was more surprising is the way he is returning.

As far as the fight goes, there is no news yet on what rules will be applied for the fight. Rizin Fight Federation (Rizin FF) is a Mixed Martial Arts promotion that promotes kickboxing fights as well so the rules could either be MMA or kickboxing, or maybe even Boxing.

Mayweather has yet do disclose information as to what rules will be followed. The weight classes to be followed will also be discussed during the preparations.

Floyd has also shown interest in fighting UFC Lightweight champion Khabib Nurmagomedov in the UFC, which makes it possible that the fight against Nasukawa may be a warm up MMA fight for Mayweather.


Who is Tenshin Nasukawa?

Nasukawa is a Japanese fighter who is currently undefeated in both kickboxing and MMA. He is the current RISE Featherweight champion, as well as winner of the RIZIN Kick Tournament 2017.

The undefeated Japanese fighter has barely turned 20, and has already accomplished a lot in his young career. He looks to add a big name to his record as he fights Mayweather on December 31.

Will this fight be a success?

Rizin 14 sure is going to receive the most buys it ever had due to the name Floyd Mayweather Jr. being on the card. This makes the event a success already from a business standpoint.

As far as the fight goes, this will depend on what rules will be used. Nasukawa is a knockout artist in both kickboxing and MMA, which will play well in his own sport.

If it will be under boxing rules, we all know what happened when McGregor, another knockout artist fought Mayweather. It's safe to say Nasukawa only has a slim chance if it were boxing.

So will this fight be a success? Well the only thing that won't make it a success is if a taint will be added to Mayweather's legacy.

Will Rizin 14 be a success? What rules do you want to see Mayweather fight under? We want to know your opinions on this fight.