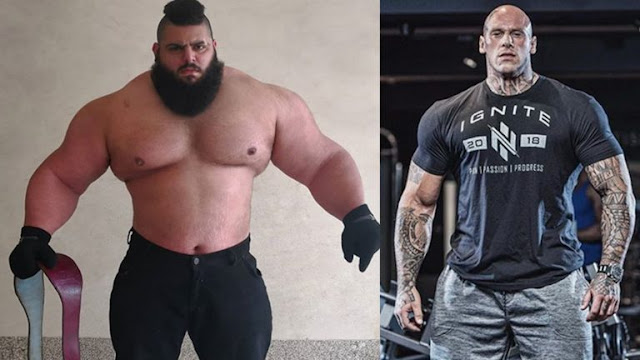 Rumors have been circulating around the Mixed Martial Arts circuit that Bodybuilders Martyn Ford and Sajad Gharibi will face each other in an MMA fight this 2019.

Ford has just signed a contract with Konfrontacja Sztuk Walki (KSW), an MMA promotion based in Poland. Gharibi is said to be signing one as well.

Nicknamed the "Scariest Man on the Planet," Ford stands at 6 foot 8 and weighs 320 pounds of pure muscle. He has been training Mixed Martial Arts for some time now.

As for Gharibi, the "Iranian Hulk" is a bodybuilder and powerlifter. He is the heavier one between the two, weighing around 350 pounds.

Gharibi is 7 inches shorter than Ford.

KSW has been known to book Goliath matches in the past, featuring bodybuilders and strongmen.

Polish strongman Maruisz Pudzianowski is one of the most notable heavyweights to compete in KSW.

The promotion has successfully picked up where the defunct PrideFC left off in terms of super heavyweight match. KSW having Ford face the Iranian Hulk in his MMA debut in 2019 is a case in point.

The thing about it is that all are just rumors right now but all is in the works according to Polish MMA sites.

It has been a common belief for first timers that the bigger the guy, the harder they punch. Those who have competed at a high level know that is not true.

Pride FC has booked a lot of these David vs Goliath matches where the significantly bigger competitor either gets beaten by pure technique or gasses out.

In this potential Goliath vs Goliath match, Ford has the advantage having trained with MMA Elites such as Anthony "Rumble" Johnson and others. That also gives him a slight edge in cardio and form.

As for the Iranian Hulk, Gharibi has yet to be seen training MMA drills, which questions his ability to be in proper shape for an MMA match. The laws of physics are also not on the side of the heavier Gharibi as fatigue sets easily on his body type.

To set an expectation for this match, this is going to be similar to Kimbo Slice vs Dada 5000 but a little more sloppy.

Are you excited for the Scariest Man vs the Iranian Hulk? Will it be sluggish or slugfest? Leave a comment and lets us know your thoughts.