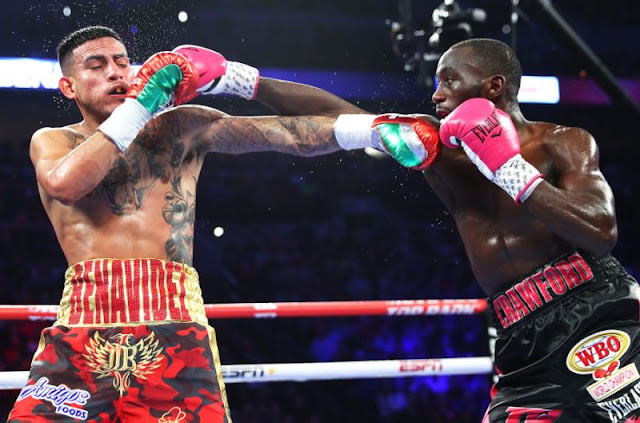 Terence Crawford put on a clinic in from of his hometown as he  a TKO victory over Jose Benavidez Jr. in Omaha, Nebraska.

The undefeated Crawford was ahead in the scorecards as the fight went all the way to the 12 round, before finishing off a brash Benavidez to retain the WBO Welterweight Title.

Both fighters were undefeated entering the bout however, only one could walk out with his unblemished record intact as Crawford moves to 34-0 while Benavidez goes down to 27-1.

Both Crawford and Benavidez were out swinging as the two exchanged blows the entire 12 rounds.

What made Crawford's performance look more dominant was that he was able to pick apart Benavidez with better defense as he was able to throw more effective counter punches.

Benavidez was looking to go forward all 12 rounds and put the pressure on Crawford but he made a huge mistake of powering through Crawford's hits instead of strategically defending them.

This cost him the fight as he got knocked down with 50 seconds left. Benavidez was able to stand back up before absorbing some more punches from Crawford prompting the referee to stop the match with 18 seconds left in the 12th round.

The only taint in Crawford's legacy is that he has yet to face an opponent with legitimate caliber. The biggest name he has faced to date was Jeff Horn, who only became known for his controversial title win over Manny Pacquiao.

The best option for Crawford right now is a unification bout with IBF Welterweight champion Errol Spence Jr.. The potential showdown makes sense from a matchup standpoint but there are certain issues that need to be fixed.

First, Crawford represents by Top Rank Promotions while Spence represents Premier Boxing Champions. Those two promotions have not worked well with each other in the past.

Second, both champions are on different television networks, which means there will be competition due to the PPV buys that a potential Crawford vs Spence will generate. One must give way to the other unless a third party network steps in and promises both networks equal profit shares.

There isn't that much left for Crawford to face except emerging contenders down the rankings.

Of all emerging contenders, Egidijus Kavaliauskas is one of the more logical choices to face Crawford. The no. 2 ranked WBO Welterweight from Lithuania has had a decorated amateur career before turning professional in 2013.

Kavaliauskas has an undefeated record of 20-0, with 16 of those wins by knockout. His heavy hands will test Crawford's defenses, especially when pushed against the corner.

With rematches a long shot after dominant performances by Crawford, they must look for options first below the rankings before crossing organizations.

Were you impressed with Terence Crawford's latest win over Jose Benavidez Jr.? What's next for the WBO Welterweight champion? Leave a comment and let us know your thoughts.