Khabib Given Hero's Welcome in Russia Amid Chaos 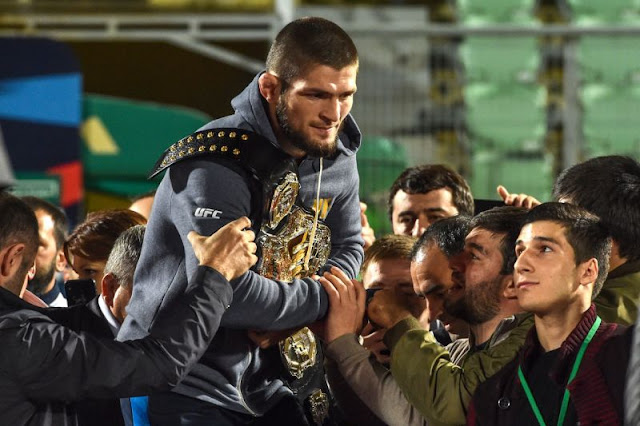 UFC Lightweight champion Khabib Numagomedov faces possible sanction for the chaos he caused after his successful title defense at UFC 229.

His tainted performance did not stop the Russian fans from giving their own a hero's welcome as he set foot in his motherland, even as his actions have drawn scorn.

Khabib flew back to Russia Monday, and was met with adoration from the people of Russia.

The 26,000-seat stadium in Khabib's hometown of Dagestan were filled with fans that all gathered to greet their champion. They were all amped once the UFC Lightweight champion set foot in the stadium.

Fans also gathered outside the arena in the hopes of meeting their hero up close and personal.

During the UFC 229 post fight press conference, Khabib explains himself saying that "he [McGregor] talked about my religion, my country, my father. He came to Brooklyn, he broke bus and nearly killed two people."

Furthermore, Khabib asks "why do people still talk about me jumping over the cage? I have shown respect." He also explained that MMA is a respectful sport and not a trash talking sport.

Khabib apologized to the Nevada State Athletic Commission and the fans in Las Vegas for his actions following the event.

Khabib's team was arrested following the incident but was then released after McGregor refused to press charges.

As for Khabib, the Nevada State Athletic Commission withheld his $2 million fight purse. The commission has yet to issue other sanctions at the moment but its safe to say they will  after further investigation.

According to him, Khabib there is another sanction he has to face now that he is back home... His father's wrath.


Does Khabib Nurmagomedov deserve the hero's welcome he received? How will MMA fans feel after this? and what other sanctions does Khabib have to face? Let us know what you feel about all this.