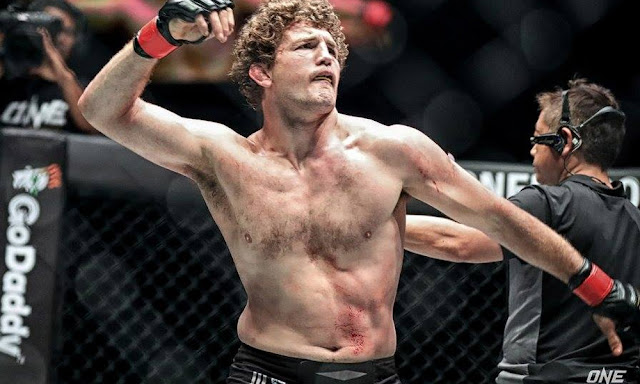 News broke out that the UFC and ONE Championship made a huge deal when they swapped former champions.

Former ONE welterweight champion Ben Askren is now going to the UFC, while former UFC flyweight champion Demetrious Johnson goes to ONE Championship.

This marks the first time in MMA history where a trade to occurs between two promotions.

While we already know the level of success Demitrious "Mighty Mouse" Johnson has achieved not only in the UFC but also in the sport of Mixed Martial Arts. Askren on the other hand is still a mystery as he chose to take his talents in South East Asia when he signed with ONE.

Askren is currently 18-0 in his MMA career, with 11 of those wins being finishes. He has beaten a who's who of the best fighters outside the UFC such as Shinya Aoki, Douglas Lima, and Sebastian Kadestam.

"Funky" announced his retirement last year after his win over Aoki but now that he is under contract with the UFC, he will have a lot on his plate in terms of challengers.

Potential opponents for Askren in the UFC

Askren vs Maia is not a fight that most would wish for in terms of fireworks but to the ones who understand the sport better, this match will be technically entertaining.

Askren is a wrestler who always looks to take down and get his finishes from there. Maia on the other hand is a high level Brazilian Jiu Jitsu black belt, who has underrated wrestling.

This fight will be a good welcome fight for Askren in the UFC.

If there is one fight that will definitely sell tickets even on a small scale, its definitely going to be Askren vs Covington. The two have already been throwing jabs on each other on social media.

Covington has been known to back his talk up with his game inside the octagon and he has accused Askren of having a "padded record" and that he has not done anything worthy yet.

Askren was quick to throw in his teammate Tyron Woodley, who Covington will have to face in a title unification bout.

This does not mean Askren is dodging. He just wants first things to be taken care of first.

This will be sort of a combination of Maia and Covington on paper but Askren vs Diaz will have its own unique buildup.

Nate Diaz is one of the fighters Askren called out on social media, and even got Nate's brother Nick involved stating that he can beat both Diaz Brothers in a handicap match without losing a round.

Diaz likes to mix his trash talk up both in press conferences and in the octagon. Although Askren will surely be looking for the takedown, Diaz will still try to welcome the former ONE champion to the UFC with a Stockton Slap.

The initial buzz maker for a potential Khabib Nurmagomedov vs Ben Askren fight is the face that both fighters are undefeated.

The problem is that Khabib currently fights at lightweight while Askren has been a welterweight his entire career. Khabib has fought at welterweight in the past but there has to be compromise for a fight to happen.

Askren has already called out Khabib on Twitter, challenging the UFC Lightweight champion at a catchweight of 165lb. His intentions for a fight with Khabib may be more to determine the best MMA grappler in the world rather than titles.

Georges St. Pierre is regarded by some as the greatest MMA fighter of all time. He has ascended to a level where little can be done to taint that legacy.

St Pierre is still at the top of his game despite not being as busy as he used to be when he was UFC welterweight champion. We are still expected to get the best out of him despite being semi retired.

A fight with Askren is more of a validation, as both fighters have an identical game, with Askren having the edge on his willingness to look for the finish.

Askren was reigning over the welterweight division of  Bellator and ONE championship at the same time that GSP was in the UFC.

GSP vs Askren is a fight that has always crossed your mind if you are a hardcore MMA fan so lets all hope this happens while both are still in their primes.