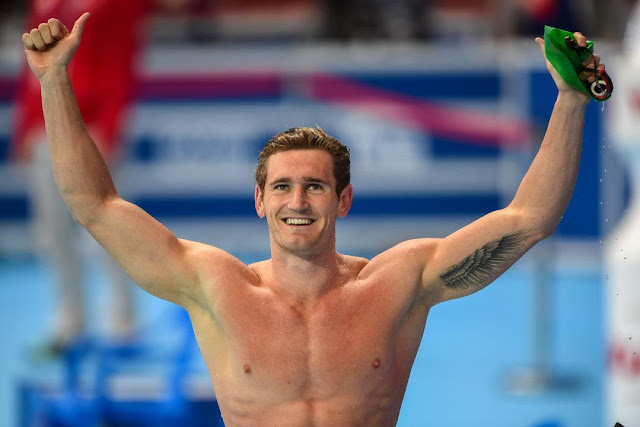 Swimmer Cameron van der Burgh has had a busy summer. The South African Olympian had a good run at the 2018 Commonwealth Games, winning one gold and two bronzes.

It was also in the said event that he made it known about his plans to retire after the 2020 Olympic Games in Tokyo. So what has the breaststroke star been up to?


Working on his fallbacks

A month after the Commonwealth Games, van der Burgh got married to his Greek fiancee Nefeli Valakenis in a beautiful ceremony in Anavyssos, Greece.

Van der Burgh still continues to compete as a swimmer as he qualified in the 100 breast at the South African Short Course Championships in August.

A month later, he announced on his Twitter account that he will be starting a new journey in London. Van der Burgh plans to trade his swimsuit for a corporate suit as he embarks on a career having a day job.

With marriage and real work, van der Bergh has done a good job working on his fallbacks.

Van der Burgh will be working for Andurand Capital Management, a hedge fund run by French businessman Pierre Andurand. The company focuses on the oil market.

He won't be the only one of his kind in the office however as he joins Olympian swimmer Clément Letert, who has been with the company for around half a decade.

Andurand welcomed van der Burgh in a tweet and said he hopes that both Olympians wouldn't mind sharing the floor.

There is still a good two years before van der Burgh possibly calls it quits. That time he may have decided if he is going to become a part time swimmer, or leave the sport for good.

The three-time Olympian is a legend in the form of the breaststroke, having won gold in the 2012 London Olympics, as well as a silver in the 2016 Olympics in Rio.

He also holds multiple world records in the 50 and 100 breaststrokes. Whether he trains to set the bar higher remains a question.

Since he will now have to balance training and a day job, its pretty much safe to say from this point forward that he may no longer have the competitive hunger but rather will be treating the sport as a plain hobby.

Should Cameron van der Burgh retire? What's next after all his swimming commitments? Let us know if he made the right decision.