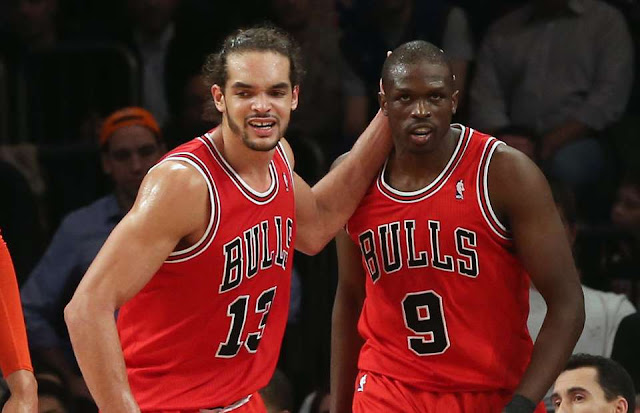 Minnesota Timberwolves coach Tom Thibodeau looks to rebuild his former lineup in Chicago as he has shown interest in both Luol Deng and Joackim Noah.

Deng and the Los Angeles Lakers reached a buyout agreement on Sunday. The deal was part of a waive-and-stretch provision, which would allow the Lakers to free up some cap space in exchange of letting Deng walk into free agency.

It will be remembered that the 33-year old Deng signed a lucrative four year, $72 million deal with the Lakers in 2016.

Noah on the other hand signed a deal identical to Deng's but with the New York Knicks. After an injury-riddled stint with the team, it was reported that the Knicks plan to part with the veteran center.

The former Defensive Player of the Year will also be a free agent once an agreement has been reached.


Where is Thibodeau's plan heading?

Thibodeau was head coach of the Chicago Bulls from 2010-2015. In those years, he managed to create a defensively cohesive lineup anchored by Deng and Noah while being led on offense by Derrick Rose.

He was also able to make a star out of Jimmy Butler as well as utilize power forward Taj Gibson for rugged situations.

Of all the former Bulls players mentioned, Butler, Rose, and Gibson are now with Thibodeau in Minnesota. The only pieces lacking from Thibodeau's Bulls lineup are Deng and Noah.

What will Minnesota do?

With the rumored heat between Butler and T'Wolves young stars Andrew Wiggins and Karl Anthony-Towns, Butler has been openly exploring other options such as a potential team-up with Boston Celtics guard Kyrie Irving via trade or via free agency.

After leading Minnesota to its first playoff berth in 14 years, the team offered Butler a four-year $110 million extension which he turned down.

Thibodeau's plan to get Deng and Noah on board may convince Butler to stay but they will also have to sacrifice a young core of Wiggins and Anthony-Towns. The management will have to make a big decision as freeing up their young core will definitely make room for Deng and Noah position wise.

Right now, management is definitely on a dilemma whether to invest on Butler or its young stars, which Butler called nonchalant.

Both Deng and Noah are past their primes statistical wise but if Thibodeau could get his former Bulls lineup running in Minnesota together with some other pieces, the Timberwolves are definitely going to contend.

Is signing Luol Deng and Joakim Noah a good move for Minnesota? Is this enough to convince Jimmy Butler to stay? What will happen to Karl Anthony-Towns? Let us know your thoughts.