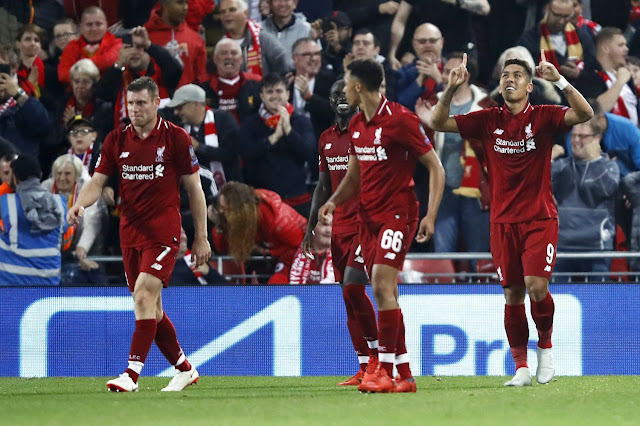 Liverpool forward Roberto Firmino scored a late game goal in the 2018-2019 Champions League opener against Paris Saint-Germain, giving them the upset win. The Brazilian struck at the 91st minute to seal the deal for Liverpool 3-2.

Firmino came off the bench as he was rested due to an eye poke incident in a game against Tottenham Hotspur in the Premier League.

It was Daniel Sturridge who started the game. Sturridge would break the ice as he scored a header from a Andy Robertson cross.

James Milner put Liverpool up 2-0 from the penalty spot before Thomas Meunier drew PSG closer with a goal before halftime.

Firmino came subbed into the game to replace Sturridge at the 72nd minute for Liverpool. Kylian Mbappe brought PSG back as he tied the game 2-2 at the 83-minute mark.

That was when Firmino did his magic at the 91st minute.


What went wrong for PSG?

The Ligue 1 powerhouse Paris Saint-Germain went with a makeshift midfield lineup of Angel Di Maria, Adrien Rabiot, and Marquinhos may have cost them as most of their firepower were up front.

Both PSG and Liverpool went with a 4-3-3 formation, which suffocated PSG's offensive firepower as Liverpool won the duels.

What's next for both teams?

Group C is said to be the competition's toughest bracket in the group stage. The bracket features S.S.C Napoli and Red Star Belgrade, who are the current champions in the Serbian Super League.

PSG will be facing Red Star Belgrade on October 4. Both are champions in their own domestic leagues which will make this game interesting.

As for Liverpool, they sit atop the standings in their group as their win against PSG gave them a three point boost. They will face Napoli next on October 25.

Can Liverpool score another upset? Will Paris Saint-Germain bounce back? Let us know your thoughts.