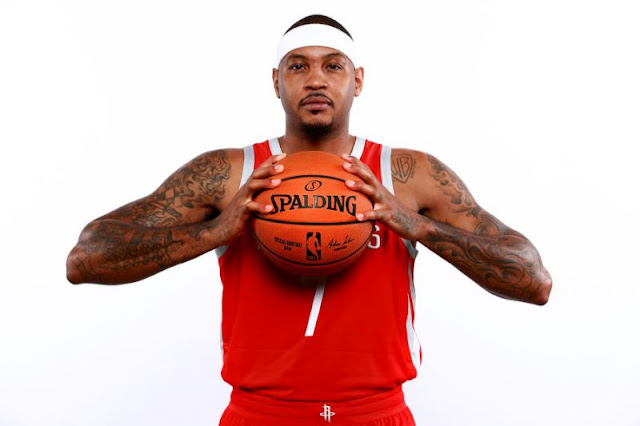 Carmelo Anthony enters his 16th season with an open mind as he sets his sights on a cohesive relationship with his new teammates.

The 10-time NBA All Star has expressed his willingness to come off the bench for the Houston Rockets. Melo wore his new uniform with pride as he shows off his Houston Rockets digs at NBA media day.

Anthony was not willing to answer questions about coming off the bench however, he looked at a possible reserve role with optimism saying "whatever I have to do to help this team win a championship, that's what's going to be done."


To age with grace

Anthony has been used to becoming a primary option thought the the years since he entered the league in 2003. The reserve role has been speculated since he first arrived to the Oklahoma City a year ago.

He laughed at the idea of him becoming a reserve when it was first asked in a press conference last year.

Realizations may have happened after the Atlanta Hawks bought him out for $27.9 million instead of making him their star.

NBA veterans such as Dwight Howard and Vince Carter have learned to accept their fate which is why they still manage to make big contributions with whatever is left as they physically decline.

Others however fail to age with grace as their egos could not take playing second fiddle to an emerging or bigger star. In Anthony's case however, he has started to open his mind to the fact that the Houston Rockets are the James Harden and Chris Paul show.

It is worth noting however that Harden and Paul are better team players as compared to Russel Westbrook and Paul George in Oklahoma City.

Despite the significantly reduced role, Anthony still managed to average 16.2 points per game for Oklahoma City last season. That is considering the number of touches George and Westbrook were getting, as well as the team's emphasis on defense.

The Houston Rockets however are in abundance of offensive firepower, which play into Anthony's strengths. They compensate on their lack of focus on defense with a ton of efficient offense, which makes Anthony a perfect fit.

Rockets head coach Mike D'Antoni has yet to figure out how his stars will play together, especially with an isolation-heavy approach in Houston.

Although D'Antoni has a lot on his plate, it's safe to say all issues will be figured out as the Rockets start training camp on Tuesday.

Do you think Carmelo Anthony will be a perfect fit with the Rockets? Will Houston finally bring home another NBA title? Let us know your thoughts.