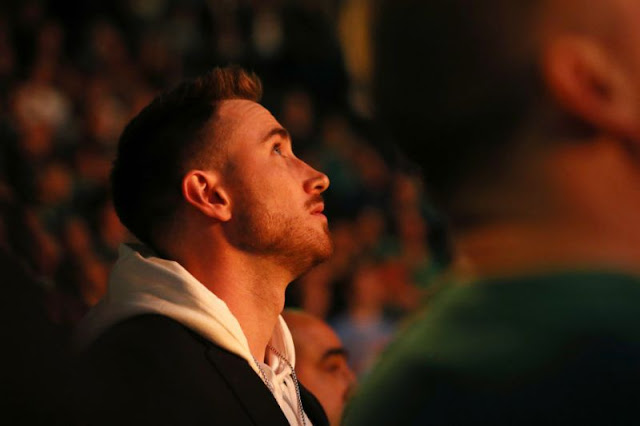 It has been 10 months since Boston Celtics forward Gordon Hayward suffered a horrific leg injury, which made him miss the entire 2017-2018 NBA season. Hayward fractured his left ankle after an awkward landing, six minutes into the very first game of the season.

Hayward has been making a steady progress in his recovery. He has reportedly been already able to dunk through contact.

The 28-year old has already been making progress the moment he was cleared for light training. As early as October last year, he was already shooting jumpers in a seated position, then jog without the support of an ankle boot, to shooting off dribbles and now, finishing through contact.

Physically, Hayward said that he is "just about full speed" however, many are skeptical on a psychological standpoint as the trauma caused by the injury may affect his performance.

Hayward's goal was to return before the end of last season however, he was not cleared to do so. This speaks a lot about his optimism.

A different team to return to

Despite Hayward's undeniable talent, his injury did not hurt the Boston Celtics one bit as they had a solid campaign the entire season. The team's young core of Jalen Brown, Jayson Tatum, Marcus Smart, and Terry Rozier have carried the team all the way to the Eastern Conference Finals despite losing All Star Kyrie Irving to injury.

The Celtics team that Hayward will be returning to is already a productive unit which is why Coach Brad Stevens is faced with the challenge of spreading out minutes between him, Irving, and the rest of the young core.

What Hayward's return means for the Celtics

Hayward won't be expected to make a huge impact upon return just yet. He will be slowly easing back into a full game as time progresses.

With the development of their young core and the leadership of veterans such as Al Horford, the Celtics are in no need to expect Hayward to produce immediately.

If a Hayward and Irving-less Celtics an go as far as to force a Game 7 in the NBA Playoffs against Lebron James, then they would do fine even if Hayward plays very limited minutes this coming season.

Will we see the Gordon Hayward of old this coming NBA season? How far do you thing he has progressed in terms of recovery? Let us know your thoughts.