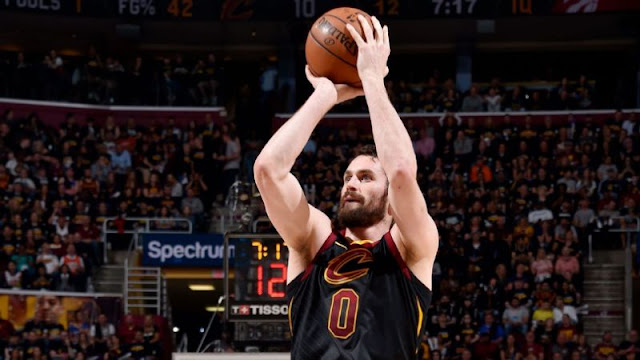 All Star big man Kevin Love has decided that he is staying with the Cleveland Cavaliers. This is in spite of Lebron James' departure in the hopes of greener pastures out of his hometown.

Love has agreed do a four year, $120-million contract extension with the Cavaliers. The five-time All Star decided to opt out of the 2019-2020 season in his current contract.

This means that Love will still earn his $24-million for the 2018-2019 season before his contract extension kicks in.

Love seems to be keen on helping the franchise rebuild as he was said to take $8-million less than his market value. Cavaliers GM Koby Altman, together with Love and his agent Jeff Schwatrz worked hand in hand to make sure the team continues to have some cap flexibility.

League sources say that Love could have earned a maximum of around $35-million annually.

Unlike his stint with the Minnesota Timberwolves, Love seems to be happy with the support that the entire city of Cleveland gives him. The fans supported him through injuries and woes, which probably contributed to his decision to stay.

During his signing ceremony at the Quicken Loans Arena, Love showed gratitude towards team owner Dan Gilbert and GM Koby Altman. He also reminded everyone of the promise he made that the city gets his full commitment.


Can Love make it to the Playoffs on his own?

Love only played 59 games last season but tallied a career second-best as he shot 41.5 percent on 3-pointers. As a Cavalier, he not only made the Playoffs for the first time in his career but also had four trips to the NBA Finals.

He is a one-time NBA champion when the team won the 2016 NBA Playoffs, where he was a key role in shutting down Golden State's shooters. Love now has the burden of carrying an entire team on his back once again.

Back in Minnesota, Love had the burden of carrying an entire team, who heavily relied on him to do all the work. He was part of a team which did not even bother boxing out or create space for Love to rotate.

Now in Cleveland, he may be faced with a similar scenario now that he is the team's only All Star. He is left with a supporting cast who relied heavily on Lebron James instead of contributing decently in their own ways.

Love did not have the same mentality as the others and continued being a team player despite being under the shadow of Lebron. Not much change is expected for Love next season except statistics.

His scoring and rebound numbers will surely go back to how it was in Minnesota but if he is able to make the Playoffs with Cleveland, it will be a testament to how far Love has gone from his early years.


Do you think Kevin Love can carry the Cavs to the promised land one again? Who else should be part of his supporting cast? Let us know your thoughts.