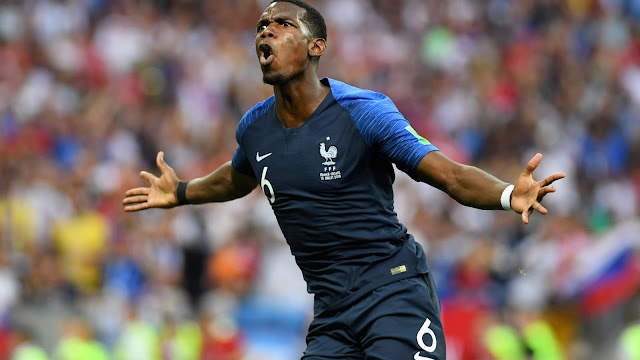 While Antoine Griezmann was their leading scorer and Teenage Sensation Kylian Mbappe became the entire talk of this World Cup for France, there is one unsung hero that was quietly contributing for his squad. It was Paul Pogba who takes home the Most Valuable Player after France beat Croatia 4-2 in the World Cup Final.

If we haven't gotten enough talk of 19-year old Kylian Mbappe all tournament, he continued to make sports headlines after scoring at the 65-minute mark. He became the first teenage player since Football legend Pele from Brazil to score at a World Cup final.

Antoine Griezmann was the top goal scorer for France in the 2018 FIFA World Cup. He ended the tournament scoring 4 goals, which ties him with Belgium's Romelu Lukaku at second in the race for the Golden Boot.

It was Paul Pogba’s quiet contributions that were the x-factor all tournament long. The ever versatile Manchester United Midfielder saved the best for when it mattered.

Pogba's pace wasn't that visible early on however, he looked sharp and on-point since the beginning. He held the team well on central midfield however, opening up opportunities for Mbappe and Griezmann to play their game.

It would actually take an analyst or a watchful eye on all of France's games to see Pogba's impact. His consistency and excellence were completely visible in the final game of the tournament as he was able to keep Croatian midfielders Ivan Rakitic and Luka Modric, the best midfielders of the entire tournament at bay.

Pogba has been highly criticized for not living up to the $116 million transfer fee that saw him transfer from Juventus back to Manchester United in 2016. He was perceived as underachieving in his two seasons back with the club.
Part of it may be due to the fact that the Manchester United Pogba returned to was not the same as when he first was with the club. The club is now composed of young talent unlike the core of Wayne Rooney, Nani, Ryan Giggs, and Rio Ferdinand which they had back then.
This year however is a good sign for the Red Devils as Pogba brings with him more experience and more time to mesh with the club next season.

Do you think 2018 is the year of Paul Pogba? Will he be able to bring a title to Old Trafford once again? Leave a comment and let us know what you think.
For more Sports News, click here for the latest updates.
FIFA FIFA World Cup Football France Manchester United Paul Pogba