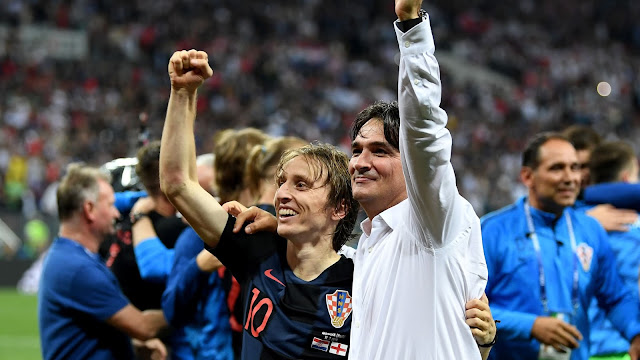 It was a battle of two Cinderella stories as Croatia and England found themselves both a game away from that elusive FIFA World Cup Final appearance. Nobody expected them to go this far in the tournament and they both showed gutsy determination in becoming another underdog story.
Croatia carried the hopes of over 4 million people on their backs as they advanced to the World Cup Final. This becomes the first time in the history of Croatian Football that their team reached the final.

A match for the ages

England started strong in the beginning as they showed the same camaraderie that got them this far into the tournament. They played spectacular Football the whole first half.

After English Midfielder Jesse Lingard gets fouled inches away from the penalty box in the first five minutes of action, England gets awarded a free kick. Defender Kieran Trippier successfully converts the free kick into a goal with a spectacular curve ball that put England up 1-0.

England did a good job taking care of their lead but signs of crumbling were evident once the second half kicked in. A resilient Croatia team relied on England's frustration on their inability to break the will of the Croatians.

Croatia then roared back with an equalizer from Ivan Perisic past Goalkeeper Jordan Pickford at the 68-minute mark. Croatia was now tied at 1-1 with no signs of slowing down.

The 30-minutes of doom

Nothing was decided in the first 90 minutes as the two teams were set to battle it out in an extra 30 minutes. Signs of body fatigue did not show in what seemed to be a draining game.

Things seemed to go well as England recovered towards the first 15 minutes but weren't able to make conversions on the many opportunities they had. It was the other half of that extra period that emulated the first 90 minutes as it became all Croatia this time.

Perisic was already having a spectacular night but continued to deliver in the last 15 minutes but it was his teammate who was the x-factor. Croatian Forward Mario Mandzukic would then sneak in between England's center backs which urged Pickford to charge off his line to make a point-blank save for his country.

Mandzukic continued to push and got the better of Pickford at the 109th minute which gave Croatia a 2-1 lead. A stunned England squad was unable to recover and missed a chance to get to the final.

Croatia had played a total of 330 minutes over the past 11 days. They became the second team in World Cup history to play three consecutive games of more than 90 minutes.

The fact that nobody expected Croatia to reach the final played in their favor as they played with no pressure. It is also worth crediting that they also had good strategies and a talented lineup which was able to hold their own despite playing at their normal.

In the end, they punched their ticket to the dinal and became the the second-smallest nation to ever make the World Cup final.

Croatia faces France in the final match of the tournament. The winner goes on to become the 2018 FIFA World Cup Champion.

They come in as underdogs once again this time despite the string of performances they put up. It will be up to Luka Modric, and Ivan Rakitic will have a tough task with the highly effective combo of Paul Pogba and Antoine Griezmann on midfield.

Perisic and Mandzukic will have to deliver again as they try to match France's Kylian Mbappe who has been spectacular on his own right all tournament long.

For now, it is best to get a well deserved rest if they would want to keep up with France's offensive pace.

Can Croatia win it all? Will they be able to push France to their limit? Let us know your thoughts on the final.