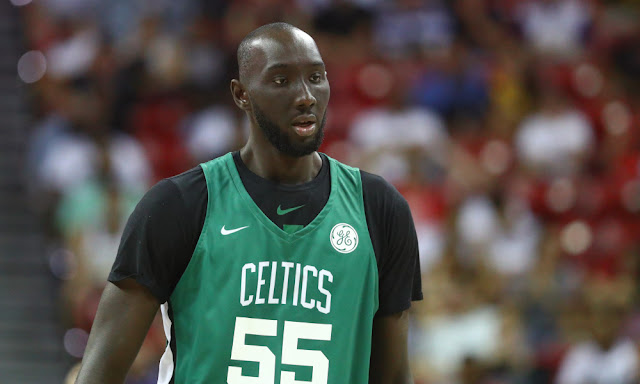 The Boston Celtics have an eye for potential. They turned “Taco Tuesday” into “Tacko Everyday” in Vegas.

After the New Orleans Pelicans announced that their rookie Zion Williamson will sit out the entire NBA’s Summer League in Las Vegas, fans were looking for another young star to keep them interested.

They turned their attention to an undrafted rookie out of the University of Central Florida, the 7-foot-6 Tacko Fall.

Darling of the crowd

While the Pelicans decided to sit Williamson out as he deals with a minor injury, Fall has quickly become an attraction in Vegas.

The NBA has been no stranger to significantly bigger men failing to make a difference.

For Fall however, his spectacular size is making significant plays and affecting games for the Celtics’ summer league team.

Fall tallied 12 points, a rebound, an assist and a blocked shot in the Celtics’ 89-72 win over the Cavaliers on Monday. He shot a perfect 5-for-5 field goals that night.

In two games, he has totaled 18 points five rebounds and two blocks in just 22 minutes of action. Also worth mentioning is his 8-for-9 shooting on the field.

Feet on the ground

Despite becoming an instant sensation in Vegas, Fall remains humble despite having a blast. “It’s been a great experience so far,” he said Monday night.

“I’ve said it a couple of times, I feel blessed for the opportunity and just for the love that the fans have shown me since I got here,” Fall added.

Even Fall’s teammates are seeing the advantages of having a 7-foot-6 center like him on the court.

Point guard Tremont Waters says that Fall can bail him out of problematic situations. “If we are in trouble, we just throw it up and it’ll look like a great play,” Waters said jokingly.

“Obviously he has the highest reach, but there’s still dudes climbing on his back and trying to claw for the ball,” Morrison said. “His ability to just catch it, not travel, gather himself and go up – or, just reach up – was impressive today.”

NBA teams looked past Fall on Draft night due to concerns about his shape. Scouts question whether Fall will be able to stay healthy for a full season in the pros.

The Celtics certainly took a huge risk by signing Fall, let alone possibly opening up a roster spot for him after the team waived big man Guerschon Yabusele.

Fall's ability as a rim protector plus being able to maximize his reach to snag up boards up high will give the Celtics more confidence in shooting from long range.

Is Tacko Fall an NBA-caliber big man? Will the Boston Celtics be able to get the most out of him in the regular season? Let us know what you think about the 7-foot-6 center.