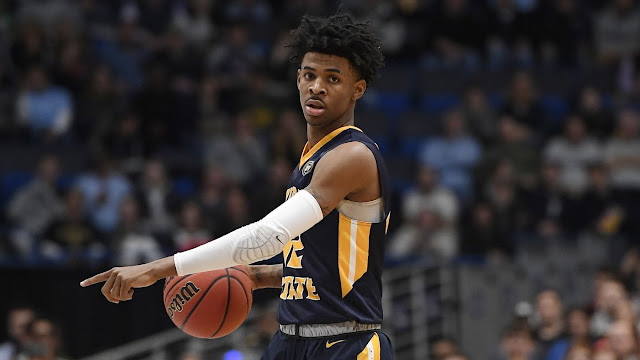 Zion here, Zion there, Zion every single time the NBA draft is being talked about.

It seems like a given already that whoever wins the No.1 overall pick in this year's NBA draft is selecting Zion Williamson.

With the New Orleans Pelicans literally stealing one by virtue of luck, it might be a good idea to consider other options, one by the name of Ja Morant.

Regardless of how the Anthony Davis drama ends, Zion isn't keeping his lack of interest in playing for New Orleans a secret. There are even rumors that he would rather stay another year in Duke.

Now back to Ja Morant, he is projected to go No. 2 to the Memphis Grizzlies. With Mike Conley aging and no other player who can play the position just as good, Morant might end up being the NBA’s best rookie next season.

But what if the Pelicans decide to choose Morant with the No.2 overall pick?

Ja Morant a fit for the Pelicans?

The Pelicans already have two point guards that contribute in Jrue Holiday and Elfrid Payton.

One or even both might go depending on what package will be thrown in with an imminent Anthony Davis trade. That would give Morant a bump to the starting lineup where he will have a lot of time to feel the NBA game.

Though signs point to drafting Zion then trading with New York for the No.3 pick to draft Duke teammate RJ Barrett, maybe they should consider rebuilding in a different direction.

Memphis is the most possible destination

This year's draft might not be a strong one and is only elevated by the Zion hype but Memphis is lucky that they have the chance to draft one of two sure things.

Murray State coach Matt McMahon says Morant plays well on the pick-and-roll, a bread and butter for the Grizzlies since the Pau Gasol days.

Morant's experience with seeing every possible type of pick-and-roll coverage since his college days will ease his transition.

The Grizzlies seems interested in drafting the 6-foot-3 guard regardless of which spot they land on in the Draft Lottery.

Lucky for them, they only have the Pelicans to worry about or maybe Zion's possible return to Duke.

The upside of Ja Morant

Morant exhibits Russel Westbrook-type explosiveness, passing like Ben Simmons and an upside just as much as Williamson’s.

He may be the more NBA-ready player when it comes to completeness in his game. His college stats of 24.5 points, 10 assists and 5.7 rebounds at Murray State is an indicator of his well-roundedness.

His basketball IQ is also sharp and knows how to use his athleticism only at the right moments.

Some even say Morand would be getting more buzz for the No. 1 pick if he played in a major conference.

Should Ja Morant be the No.1 overall pick in this year's draft? In which team can he provide immediate impact? Let us know where you want the Murray State standout to go.