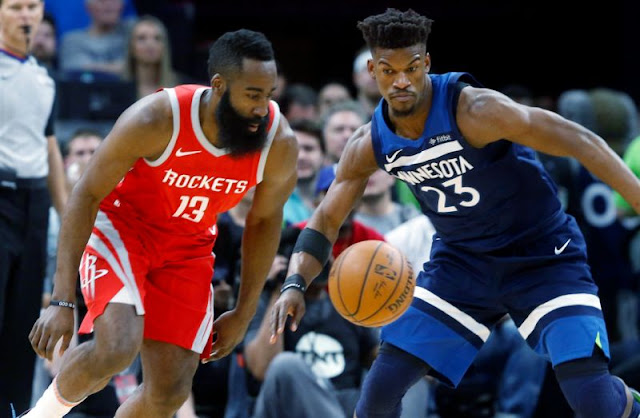 The Houston Rockets are making a huge splash in order to acquire the services of wingman Jimmy Butler.

NBA reporter Adrian Wojnarowski of ESPN reports that the Rockets are making a renewed bid, which includes four future first-round draft picks in exchange of the All Star wingman.

Butler has openly expressed his displeasure with the Minnesota Timberwolves organization for a while now. The NBA All Star wishes that he soon be traded to a contending team.

In Butler, the Rockets wish to add more firepower to an already deep offensive rotation.

LeBron James was the first to successfully start a trend of forming "Super Teams" in chase of an NBA Championship. He has won championships with both the Miami Heat and the Cleveland Cavaliers respectively.

Russell Westbrook on the other hand was unsuccessful in creating his own after his recruitment of Paul George and Carmelo Anthony in Oklahoma City did not work the way they wanted.

Stephen Curry is the man to beat right now as he has followed suit and formed an All Star cast in Golden State. The reigning NBA Champions are the team to beat and each team looks to acquire as many stars as possible.

The NBA has a rule regarding trading first-round draft picks where teams are not allowed to trade them in consecutive years. That means that the Rockets can only offer their 2019, 2021, 2023, and 2025 picks.

According to Wojnarowski, the draft picks offered by the Rockets will come with limited protection.

Will the trade happen?

The Rockets are willing to pay just to chase that championship ring. This price to pay may even mean their future as Butler staying in Houston is not a guarantee as well.

First, Butler is bound to be an Unrestricted Free Agent in 2020, which will possibly cost the Rockets their long future shall he walk into free agency. Second, the stipulation of the draft picks involved are not very inviting if you are the Timberwolves.

Let's say the deal pushes through. Now that the Rockets have Anthony with them, having Butler on the team can possibly cover part of their limitations on then defensive end.

We do not know what happens outside the court but right now, Butler continues to decently contribute for the Timberwolves despite his displeasure.

Maybe that is the kind of professionalism that brings the Rockets their first NBA title since 1995.

Will the trade for Jimmy Butler happen? Will the Timberwolves agree to the Rockets' offer? We want to know your thoughts.