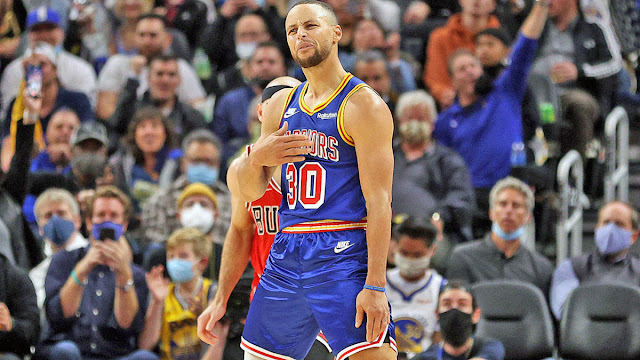 Stephen Curry has become the new leader 3-point shots made and he's still going.
The 33-year old became the 3-point king when he broke the record on Tuesday night in the Golden State Warriors' matchup against the New York Knicks.
He passed Ray Allen on the NBA's all-time record for 3-pointers made at 2,974.

Curry was two 3-pointers away from the top spot when he entered the game. He broke the record on his second 3-point attempt with 7:33 left in the first quarter.
What makes the feat sweeter is that it took Allen 1,300 career gamed to achieve such record only for Curry to topple it on his 789th.
Curry already holds a multitude of 3-point records in the NBA such as the career 3-pointers per game (3.8), 3-pointers in a single season (402), most games with double-digit 3-pointers (22) and most 3s in a calendar month (96).
Earlier this season, Curry passed Allen's mark of most career 3-pointers in the regular season and postseason combined.

Another record in the books

Allen himself was excited for Curry to pass his record. Even the away crowd in Madison Square Garden erupted when he made the history-making 3-pointer.
"I don't even have words for it, to be honest," Curry said earlier this season. "It's not just getting the record. There's another caveat of hoop heads knowing volume and efficiency is huge. Like, mastering both. So the fact that I have -- I know I still got a lot more in my career -- been able to shoot the percentage that I have in the regular season over the course of my career ... with how defenses have changed against me and the shots that I take, and all of that, to me is pretty special. But to get to that number is a big deal."
Curry has become a game-changer. His negligence of his other skills in favor of shooting threes is a smart move given how his injury history made it not feasible to focus on anything else.
The fact that Curry influenced everyone to shoot threes, it's not far from possible that somebody out there would achieve it faster than he did someday.
Could Kyle Korver have achieved such feat if they made him the top scorer? Maybe other players will learn from that now.