Justin Gaethje vs. Michael Chandler is the 2021 MMA Fight of the Year 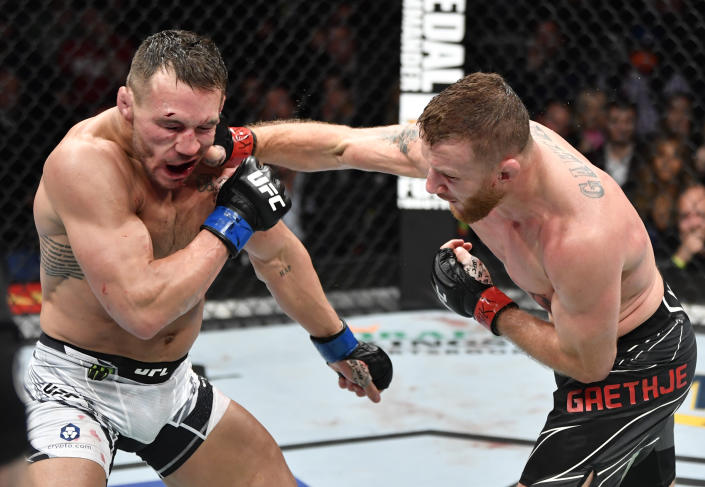 The secret sauce that makes the UFC what it is is something that Dana White and Co. hold tight. Among the many things the UFC president has accomplished, he’s found a way to get his fighters to compete in the most fan-friendly style possible.

There was an old saying in boxing that some still live by: “Win today and look good tomorrow.”

White, though, scoffs at such a narrative and has found a way to get his fighters to lay it on the line more often than not.

He’s not telling for the same reasons the bosses of the Coca-Cola Company aren’t revealing the secret formula to the world’s most popular soft drink.

But 2021 was spectacular throughout MMA, though two fights stand well above the others.

Both, coincidentally, involve the same man, though in some ways and in some places, UFC lightweight Michael Chandler should be the Fighter of the Year.

Chandler, after all, is the guy who gave us a pair of epic bouts for the lightweight title. In May at UFC 262, he fought Charles Oliveira for the vacant title. It was back and forth for the entire fight. It was Chandler on top, then Oliveira, then Chandler and then Oliveira.

It was fast-paced, had plenty of near-finishes and had a dramatic ending.

Oliveira won and became lightweight champion when he knocked out Chandler early in the second round.

As good as that one was, though, it was only Chandler’s second-best fight of the year. The winner of the 2021 Yahoo Sports Fight of the Year was Chandler’s bout at Madison Square Garden at UFC 268 with Justin Gaethje.
Gaethje won a decision in a typically wild Gaethje fight. Chandler tried to fight Gaethje’s frenetic, all-out, super aggressive style and while he pulled it off admirably, all he had for his efforts at the end of the day was another loss.

But it was a bout for the ages, one that ranks among the best UFC fights ever and had as many momentum changes and jaw-dropping moments as you’re likely to see in a month.
Justin Gaethje Michael Chandler MMA UFC