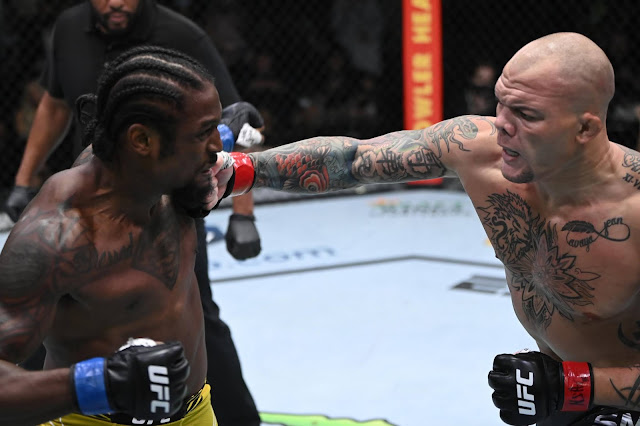 UFC Fighter Ryan Spann still has a smile on his face despite a tough loss to one of the most respected players in UFC, Anthony Smith.
30 year old MMA UFC fighter, Ryan Spann also known as “Superman” spent his fight with Anthony Smith on survival mode.
A loss of this magnitude on this stage would be devastating to some fighters' self-esteem. "Superman" was mostly avoiding the kryptonite and was in survival mode during the fight.

Smith defeats Spann in Round 1

In the first round, he was knocked down twice and eventually beaten by Smith with a rear-naked choke. But despite all that , Spann just seems to be taking the news well. On Saturday, Spann (19-7 MMA, 5-2 UFC) made his UFC debut by facing fellow light-heavyweight contender Smith (35-16 MMA, 11-6 UFC) at the UFC Apex event in Las Vegas.
Unfortunately, he was unable to do anything. Spann took to his Instagram after his fight and captioned a photo of him in the Superman stance showing off the Superman logo with “still smiling” letting his fans know that he still has that positive energy going on and is looking forward to a more satisfying success in his future fights.

Meanwhile, Anthony Smith wanted to let everyone know that he is one of the most respected and skilled fighters out there. After finishing the fight with his rear-naked choke, he stood over Spann and security had to take over to make sure that the fight ended well. Smith ended their match assuring Spann by embracing him and they exchanged some words. During the post-fight conference, Smith had some words he wanted to get out of his chest.

“Maybe this is going to sound arrogant or pretentious but I have earned the respect from my peers,” Smith said. “I put a lot of work into this game. I’ve sacrificed my entire adult life to be here. To be in the position I’m sitting in right now... You don't have to like me, all I'm asking is for respect.

Smith assured everyone that he didn’t want to cause any issues or bad blood between him and other fighters.
At this point, he doesn’t actually care anymore. But if he’s feeling a certain way and there’s a microphone in front of him, then he’ll speak up and say what he feels. To prove the doubters wrong, Smith has won three straight fights, including a dominating performance on Saturday against Spann.
Smith says he is done trying to live up to anyone's expectations. In his words, "I'm concerned because I want others to appreciate my sacrifice, or at least acknowledge it.” After he lost to Glover Teixeira and Aleksandar Rakic back-to-back, Smith nearly shrugged off as if his career at the top of the rankings was already over.
He has given up trying to win over the skeptical critics who dumped dirt on his grave.
For more SportNuz, click here for the latest updates
Anthony Smith MMA Ryan Spann UFC