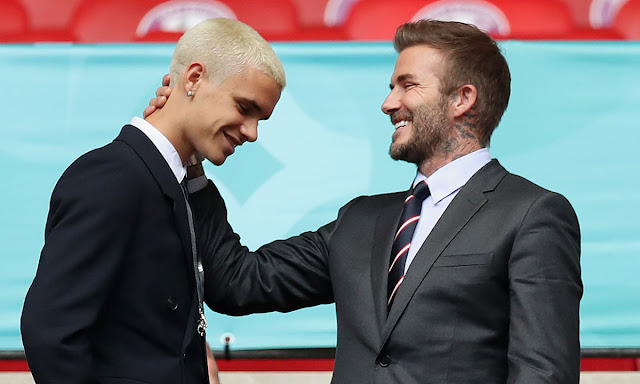 Another Beckham is about to make waves in the sport as son of former professional footballer David Beckham debut’s soccer career at MLS club Inter Miami.

Following on his father’s footsteps

19-year-old, Romeo Beckham son of former professional football player David Beckham makes his football debut. As he wore the number 11 on his jersey, he played with former Manchester United rookie Harvey Neville, the son of Inter Miami manager Phil Neville, who manages and operates Fort Lauderdale.
In January, Inter Miami co-owner David Beckham named Neville, a former Manchester United and England colleague, as head coach following a tenure as England Women's coach.
He enjoyed playing 79 minutes on the right wing, exactly as his father did throughout his playing days for Manchester United, Real Madrid, and England.
"Blessed to have made my pro debut tonight for @fortlauderdalecf. Full focus onto the next match," Romeo captioned his social media post.
On the right track and making his dad proud"I thought he did really well," said Inter Miami coach Phil Neville
"I think the measure of his performance was that he only planned to play 45 minutes, and he played nearly 80 minutes because he is a boy that is hungry.” The 19-year-old, who signed a deal with the football team in early September, revealed some brilliant moments and gave his new squad an easy victory. Neville explained how he was fond of the young player and that he has a lot to learn and achieve ahead for future games to come.
"He has got a lot of pressure and expectations on his shoulders, but what he has got is he has got his feet firmly on the ground.” Neville continued. Romeo joined Fort Lauderdale CF's roster earlier this month in a low-key move that was made without an official announcement. "He knows he has got a lot of development to do, and he has got all the right attributes, character, determination, good person, to have a really good opportunity of making it in professional football."

Training to be the next Beckham

Romeo Beckham is proving how determined he is to make his father proud and become a great player as well. Before signing up with the team, he also constantly goes through training with Inter Miami. Harvey Neville, Phil Neville's son, has also played for Fort Lauderdale this season, appearing in 15 games.
Neville revealed that his former Manchester United and England teammate David Beckham had encouraged him to be firm with his son. "The first thing David told me was, 'You have to be tougher on him than everyone else,'" Neville said.
Being on that team can be a challenge and could cause doubt and a lot of questions from people. That’s why Romeo needs the extra push and encouragement to prove that he is his own kind of player and can lead his team to victory. "He understands he is no different from any other player while he is at this football club," said Neville about Romeo.