Lawler vs Diaz II in UFC 266: The Most Awaited Rematch of the Decade? 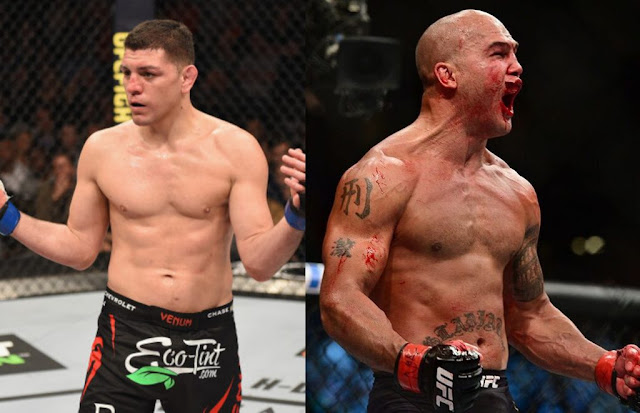 Robbie Lawler and Nick Diaz will fight once again after almost 20 years since they last met.

The match is a five-round, non-main, and non-title event, but it is surely the most anticipated fight at UFC 266 on September 26. The bout is held alongside the main match between Volkanovski and Ortega at the T-Mobile Arena in Las Vegas, Nevada.

The fight will be a massive comeback for Diaz after his six-year hiatus since his match with Silva. Likewise, Lawler hasn’t fought since Neil Magny defeated him by a unanimous decision in August last year.

The rematch will occur 17 years after the initial fight, which UCF claims to be the longest gap in history.

Diaz against Lawler, The Classic Fight of the 2000s

Diaz and Lawler first fought at UFC 47 on April 2, 2004. At that time, “Ruthless” Lawler was a promising and rising welterweight fighter with seven streak wins and one loss.

But everything got out of hand when the then nameless Diaz bossed him around in the octagon. Diaz taunted and bullied Lawler, and the people didn’t expect such a turn of events.

Lawler was famous for getting the upper hand in the first few minutes of his fights. But Diaz challenged Lawler with his proactive jabs, trash talk, and footwork that left him wobbling around.

In the second round, Lawler threw right combinations when Diaz found an open and went straight in. Diaz knocked out Lawler face-first with a powerful right punch on the chin.

Diaz and Lawler defined how true fighters play. Pure fight, unstoppable will, without any hesitation. They showed the people what they wanted to get from a fight.

The Stockton native, Diaz, loves messing around with his opponents mentally and crushing them internally.

However, Diaz totally changed the game with his superior cardio. He popularized landing consistent strikes with everlasting endurance and strength. Diaz doesn't throw max-powered hits, but he will hit his opponents twice as much, tire them out, and strike on them.

Unlike Diaz, who goes for longer rounds, Lawler immediately fires up the game. He attempts to finish his opponents right off the bat. Also, Lawler is infamous for his explosive striking ability, right combinations, and chopping knee kicks.

But he adapted to longer fights later in his career, when he challenged Matt Brown and Johny Hendricks. He relentlessly sets up the pace of the game and continues to attempt to take down his opponents.

Robbie Lawler is predicted to win against Nick Diaz. After all, it’s been six years since Diaz has fought while Lawler has been fighting almost every year.

However, both of them did have some trouble winning fights. Diaz hasn’t won since 2011, and Lawler has four losses in a row for three years.

Nevertheless, some MMA fans still place their bets on the underdog, definitely beating the odds of the early prediction. For more SportNuz, click here for the latest updates