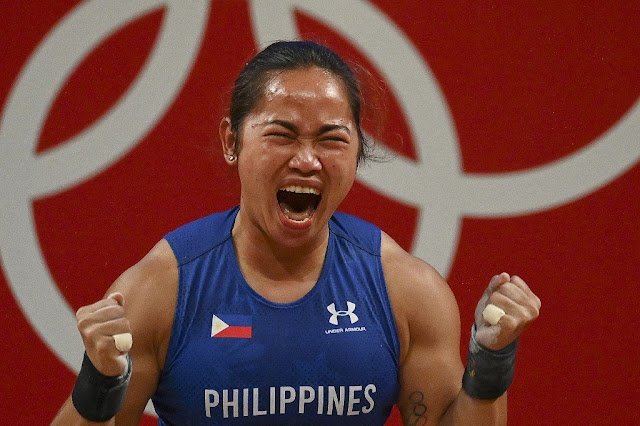 Another female weightlifter just made history, not only lifting women but also her beloved country, the Philippines.

The 30-year-old set an Olympic record by lifting a combined weight of 224 kg in her fourth and likely final Olympics.

Liao Qiuyun of China claimed silver with 223 kg, missing out on tying her own world record. Zulfiya Chinshanlo of Kazakhstan took bronze with 213 kg.

Diaz fell into tears after completing her final lift in a close competition, embracing her coaches and clutching the medallion around her neck. She stood to attention on the stage, still teary-eyed, saluting as she sang the national anthem of her country at the top of her lungs.

With all the weight this athlete had to carry on her shoulder, Hidlyn's success in life proved that she is indestructible.

Hidilyn wasn't born with a silver spoon in her mouth--she is the daughter of a farmer who became a tricycle driver. Her life began in a tiny hamlet near Zamboanga, called Mampang. She grew up in a less fortunate family of 8 with athletics being the last thing on her mind and thought of becoming a banker instead.

When Hidilyn was only 10 years old, Elbert Atilano, a weightlifter, and Catalino Diaz, her cousin, both saw potential in her physical build.

When she was only starting to train, her first equipment were improvised barbells built from plastic tubing and cast concrete weights on either end. Overuse of her first genuine barbell caused it to break. Ramon Solis, the Philippines' lone Olympic weightlifter, was Hidilyn's early coach.

Not known to many, she's been lifting for more than a decade now. Hidilyn competed in her maiden Southeast Asian Games in 2007, winning bronze in the 58-kg event. A year later, 17-year-old Diaz made her way to the 2008 Beijing Olympics as a wild card entry in the women’s 58kg class, placing 11th out of 12 participants.

She struggled with three failed 118 kg clean and jerk efforts while in London for the 2012 Olympics. In the following two SEA Games, in 2011 and 2013, she would finish second. Diaz, on the other hand, would create Philippine sports history four years later, when she won the country's second-ever silver medal at the global games.

Hidilyn would go on to win another gold for the Philippines two years later in the Asian Games in Jakarta, this time in the women's 53kg weightlifting class. Diaz also began to take a firmer grip on the reins of her profession in the same year.

She won a silver in the 2019 Asian Championships, a year before the Tokyo Games were scheduled to begin, and a gold in the Southeast Asian Games soon before the year ended. Diaz was forced to stay in Selangor, Malaysia, (which has been her home) for the next year due to travel limitations. She expressed displeasure and fear in an interview about the games' uncertain situation.

The Philippine weightlifting queen is also scheduled to collect P33 million in incentives from the Philippine Sports Commission (PSC) and the country's tycoons after being the first Filipino to win an Olympic gold medal.A gold medal in the Olympics is worth P10 million, according to the PSC's incentive system (RA 10699), and Diaz is the first Filipino athlete to receive that sum from the country's official sports agency.