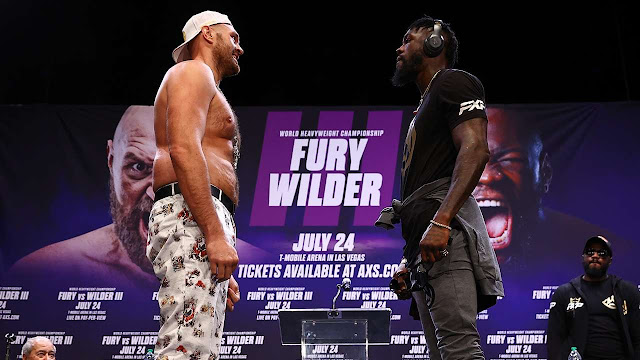 Top Rank confirmed Thursday that the big-man fight will now take place later this year at T-Mobile Arena in Las Vegas.
The fight, which was set for July 24 on ESPN+ and Fox, was canceled last Thursday when Fury tested positive for COVID-19 last July 6 during an outbreak in his camp. At the time, ESPN stated that the rescheduled title match will take place on Oct. 9, 2021.

Good thing Fury was able to recover on time. On Tuesday, he tested negative, and doctors cleared him to return home shortly after. Fury got his first immunization shot and only had minor side effects.

Tyson Fury and Deontay Wilder are bound to fight for the WBC heavyweight title for the third time in their career.

A Brief History of the Fury-Wilder Clash

The possibility of a battle between Wilder and Fury has been discussed and promoted for several years prior to the fight, notably on social media by the two boxers themselves.
Wilder knocked out Audley Harrison on the undercard of Amir Khan vs. Julio Diaz at the Motorpoint Arena in Sheffield in April 2014, with both Wilder and Fury promising each other a future battle.

After Wilder knocked out Szpilka in stunning way at the finish of the fight, Fury stormed into the ring in an attempt to set up a future bout, this time in front of an onlooking crowd and a live television audience. Fury made a scene by grabbing the microphone to provoke Wilder with his words. The two ended up exchanging statements against each other that made this potential match even more exciting.

However, Fury postponed the Klitschko rematch twice in the following months, first due to an ankle ailment in June, when the rematch was moved from July 9 to October 29, and then again in September, when he was pronounced medically unfit following a positive cocaine test.
In an Instagram video posted on June 27, 2018, Fury said to Wilder, "I will apologize on behalf of Eddie Hearn and Anthony Joshua because they are from the same country as I am, they will not fight you and they have taken three months stringing you and the fans along with no intention of fighting, but I will fight you in three seconds.
The two posed for photos before engaging in a face-off, with Fury's promoter Frank Warren announcing that the bout was on, with only a date and location in the United States to be announced.
The fight contract between Fury and Wilder includes a clause that allowed the loser to demand a trilogy match unilaterally. In a video posted to his social media channels on February 29, Wilder declared that he had invoked the clause and promised redemption, "We will rise again...".

Inside the Boxing Ring

In their first fight back in 2018, Wilder hit 71 of 430 punches thrown (17%), while Fury landed 84 of his 327 thrown punches, according to CompuBox data (26 percent ).
In this bout, Wilder was far less accurate than he had been in previous battles. In 9 of the 12 rounds, Fury out-landed Wilder. Only four rounds saw both Wilder and Fury land double digits.

Wilder and Fury battled to a 12-round split decision tie in front of a crowd of 17,698 at the Staples Center, meaning Wilder retained his WBC belt. The fight was judged 115–111 for Wilder by Mexican judge Alejandro Rochin, 114–112 for Fury by Canadian judge Robert Tapper, and 113–113 for a draw by British judge Phil Edwards.

While in their second match, Fury was up on all three judges' scorecards at the time of the stoppage, 59–52, 58–53, and 59–52, with the uneven scores owing to Bayless deducting a point from Fury in the fifth round for holding.
Fury landed 82 of his 267 total punches (31%), including 58 of 160 power punches, according to CompuBox (36 percent ). Wilder landed 34 of his total 141 punches (24%), including 18 of his 55 power punches (33 percent ).
With a powerful right hand to the temple in the third round, Fury knocked Wilder out. Wilder beat the count and made it through the round, but he was visibly bewildered as blood poured out of his left ear. Wilder was able to get back to his feet, but he was unable to mount much of a counterattack, and he was now bleeding from both the mouth and the ear.
Midway through the seventh round, the bout was stopped due to a flurry of hard-hitting blows from Fury, prompting Wilder's camp to call it a day to save him from more harm.

Who Will Reign this Time?

The first battle between the two back in 2018 resulted in a draw, with Fury twice getting up off the canvas, most notably in the final round when he appeared to be out.
The second match in 2020 was a completely different story, with Fury charging forward and bulldozing Wilder to a seventh-round stoppage loss. Wilder made a slew of ridiculous reasons for his loss, citing anything from a heavy ring walk costume to his trainer throwing in the towel.

Despite getting battered by Fury, Wilder is actually recognized as the "hardest hitter in the history of boxing". He has won 41 of his 44 professional boxing contests by knockout, with 20 of them ending in the first round.
Wilder seems to be quite optimistic and confident, too, that he managed to serve Tyson death threats. On the other hand, it seems to appear that Tyson Fury may not be totally prepared for a rematch with his old opponent going into this battle.
His victory in the rematch was widely regarded as the conclusion of Tyson Fury's rivalry with Deontay Wilder. To emphasize this point, Tyson Fury was disrespectful and disparaging of his American opponent during the pre-fight press conference.
For more SportNuz, click here for the latest updates.
Boxing Deontay Wilder Tyson Fury