Bucks In Six: Why Milwaukee Will Win Game 6 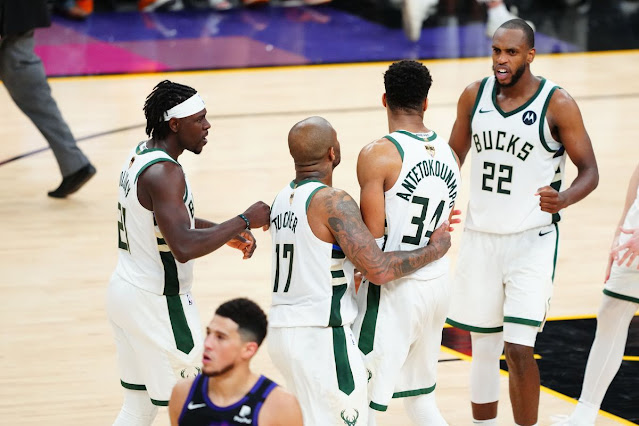 The Milwaukee Bucks are only a few steps away from winning their first championship since 1971.
Here’s why they would win against the Phoenix Suns and be crowned champions.

After a devastating loss at home, the Phoenix Suns are once again ambushed by how dedicated the Bucks are to win.
Game 5 ended with Devin Booker and Chris Paul battling their way to shoot a three and ultimately ending the game tied and overtime. But it was no use and the Bucks proved just how powerful and disciplined they are to win.
Consisting of the big three with Giannis Antetokounmpo (32 points, 9 rebounds, and 6 assists), Khris Middleton (29 points, 7 rebounds, and 5 assists), and Jrue Holiday (27 points, 4 rebounds, and 13 assists) all under 41-44 minutes.
They gave it their all and lead the series to 3-2 with Game 6 on the way and being back at Milwaukee. Within 50 years, the Milwaukee Bucks will be expecting to win their first NBA franchise championship and will be taking their side in Game 6.
The focus of the Suns is to tamper a defense that enabled Giannis Antetokounmpo a pair of 40-point games, Khris' Middleton and Jrue Holiday's memorable Game 5 effort. "Our guys have always wanted it, but I think when you're in moments like this, this is different," Suns head coach Monty Williams said.
It’s desperation for the Suns to win back the title and hopefully get to play for Game 7 and Discipline for the Bucks as Game 6 is now considered for them as the final game, the ultimate championship, the last fight.

With Game 6 being at the Bucks’ home court in Milwaukee it’s going to be inspiring for them but intimidating for the visiting team.
Home court advantage has always been a major factor for these games because of the support and love for the fans. The Bucks could ultimately claim the title and make their fans proud. But the Suns could fight back and do what the Bucks did to them back in Phoenix when they lost at home.
Nonetheless, there are many reasons why the Milwaukee Bucks have the advantage. Milwaukee is a great home team and has overcome the challenges during the past 3 games against the Phoenix Suns.
They have their struggles and Giannis needs to work on his free throws, but they are a disciplined team who knows what they’re up against. They know how to step up at desperate times.
Holiday and Middleton can shine in their own right with great offense and assist as well as Giannis turning superhuman at any moment when truly necessary.
With the team at their best and true potential, the Suns can see the trophy at another time.
For more SportNuz, click here for the latest updates
Milwaukee Bucks NBA Finals Phoenix Suns