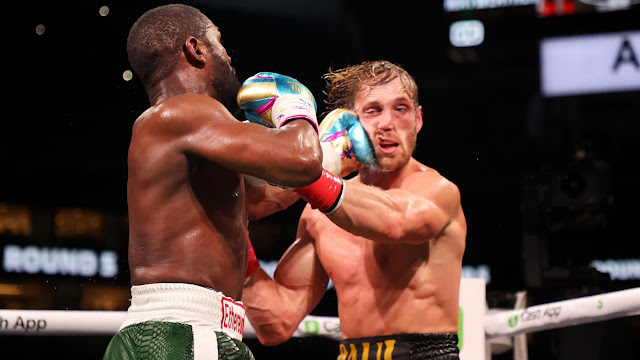 Floyd Mayweather has defended the world of boxing as he dominated YouTuber Logan Paul on Sunday in an eight-round exhibition fight.
In what could possibly be the final time we ever see the boxing icon in a ring, Mayweather overcame a more than 30-pound weight disadvantage to produce a slick performance at the Hard Rock Stadium in Miami, Florida.
Despite the performance, the fight had to end in a draw.

Mayweather vs Paul ends in a draw

The fight between the two as also an exhibition match, meaning there weren't any referees. One had to finish the other inside eight three-minute rounds in order to be declared a winner.
Paul utilized his weight and reach advantage to keep Mayweather at bay. He seemed to be getting the upper hand in a mere fan's perspective but it was the undefeated Mayweather that made more significant hits.
Mayweather called it a "training session" when asked on his thoughts after the fight. The former boxing world champion said he had fun at the end of the day.

He also used this as an opportunity to solidify his decision to stay retired from professional boxing.

"I am going into the Hall of Fame, I have nothing to prove," Mayweather said.

Paul has been heavily involved with the boxing world lately. Aside from promoting boxing matches between public figures, he has a boxing match under his belt as well.
He lost via split decision when he faced KSI in 2019. He was more focused on hyping his brother  and fellow YouTuber Jake Paul, who is currently 3-0 in his boxing career.
Mayweather, on the other hand has had his fair share of exhibition matches. He beat Japanese kickboxer Tenshin Nasukawa in December 2018.
For more SportNuz, click here for the latest updates.
Boxing Floyd Mayweather Logan Paul