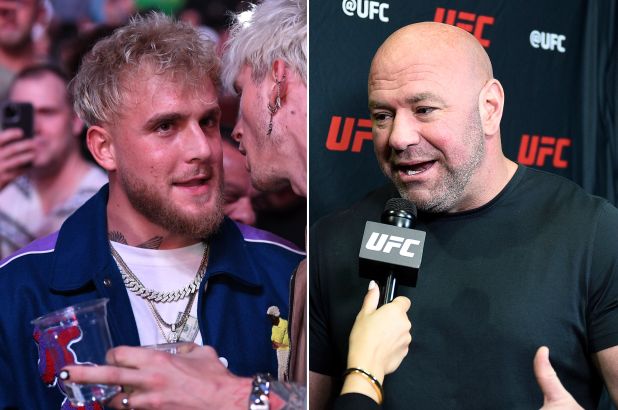 Jake Paul and Dana White aren't going to see eye to eye on something. The two are still going at it when it comes to fighter pay.
Paul made an appearance at UFC 261 on Saturday. The YouTube star turned boxer fired back at the UFC president on social media after the event.

Dana White called out Jake Paul and Triller Fight Club at UFC 26.
The UFC president claimed that the YouTuber and the fight promotion lied about the pay-per-view numbers for Paul’s fight against Ben Askren earlier this month.

White said he didn't know if the numbers are there. "He ain't fighting in the UFC. He's getting hand-picked opponents, and God knows what else is going on with that whole f***ing thing," White said.

Paul knocked out Askren, a former UFC fighter in the first-round in a star-studded Triller Fight Club event last Saturday in Atlanta.
The YouTube star claimed that the event had 1.5 million pay-per-view buys and generated $75 million.
Paul fired back on social media on Sunday after hearing White’s comments. He also had a heated exchange with former UFC heavyweight champion Daniel Cormier after showing up in Saturday's UFC event.

He talked about fighter pay and how his event pays more money to its fighters than the UFC ever did despite creating superstars in the sport.
For more SportNuz, click here for the latest updates.