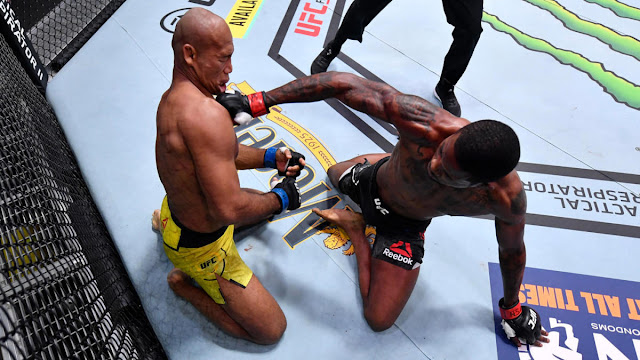 Kevin Holland is the busiest fighter of 2020. His ridiculous fighting pace just ended on a spectacular note.
Holland knocked out former Strikeforce middleweight champion Ronaldo "Jacare" Souza on Saturday at UFC 256.
He became just the third fighter in UFC history to go 5-0 in a calendar year. Holland joins Roger Huerta in 2007 and Neil Magny in 2014.
Holland scored his 5th win within a 210-day stretch. The way he did it was spectacular.

Jacare went to his bread and butter ground game as he landed a quick takedown. Holland kept busy on his back as he threw hard elbows and attacked with submissions.
Souza thought his opponent was playing his game. That's when Holland threw a strike that came out of nowhere. Holland stunned stunned Souza from the bottom and followed it up with savage punches when he stood up
The referee called a stop at the 1:45 mark of Round 1.

Holland has managed to fight in five fights this year. That alone is already an accomplishment considering how scarce fights came for UFC fighters due to precautions brought by the Covid-19 pandemic.
At 5-for-5 this year, Holland is knocking at the doors of top tier competition now that he is ranked no. 10. He trails just behind middleweight champion Israel Adesanya, who is currently on a nine-fight winning streak.