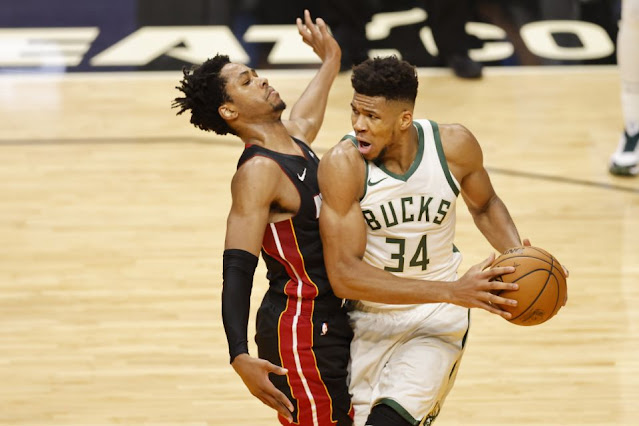 The last time the Milwaukee Bucks and the Miami Heat met, there was an upset when the top-seeded Bucks were eliminated by the heat.
Now, the Heat are the favorites and they were upset in the first meeting of the season and the Bucks looked like they clearly had prepared for this very day.
Milwaukee came out swinging early on with a 12-0 run and ended the first quarter with a 46-26 lead. The team set an NBA record with 29 3-pointers in a single game.
By the time, Miami proved no match as Milwaukee won 144-97.

Everyone seemed done and threw in the towel as the Bucks continued to extended their lead to 93-62 in the third quarter.

The lead never went down as every Bucks player was connecting from deep except for one: Reigning two-time MVP Giannis Antetokounmpo.
Antetokounmpo  had a lowkey night as he only made 3 of 9 field goal attempts and logged only nine points, six rebounds and six assists.
It wasn't like they needed it as even Backup guard Sam Merrill made a 3-pointer. There were a total of 12 players who connected from long distance.
Milwaukee's other all-stars Khris Middleton and Jrue Holiday made sure to cover up for their superstar's off night as they scored 25 and 24 apiece.

To be fair, Miami didn't have their own superstar as Jimmy Butler was sidelined by an anke injury.
It was only Tyler Herro who tried to keep it at least respectable as he made 23 points. Unfortunately, the effort wasn't enough to chip off the 47 points they got blown out by.
Maybe next game will hinder different results.
For more SportNuz, click here for the latest updates.
Miami Heat Milwaukee Bucks NBA