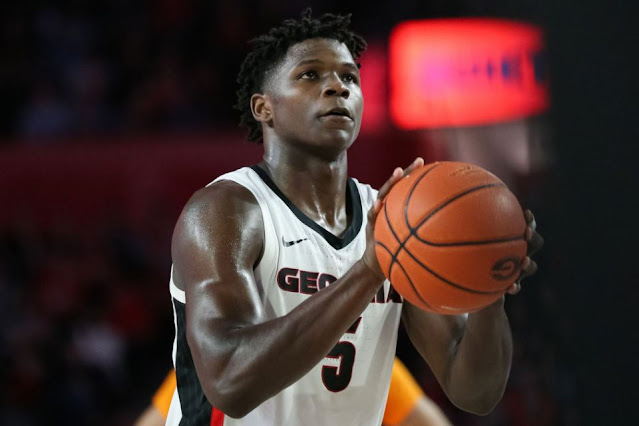 The Minnesota Timberwolves went with necessity as they picked Anthony Edwards as the No. 1 pick in the 2020 NBA draft
The draft announcements were done at the ESPN headquarters in Bristol, Connecticut. Boxes of hats were shipped to the top prospects to put on the one they needed once Commissioner Adam Silver announces which team picks them.
The draft was originally scheduled for June 25 but had to be pushed further and further due to the current pandemic. It was the first time in a long time that the draft was not held in the Barclays Center in Brooklyn.

Wolves select Edwards with No. 1 pick

Edwards was emotional when his name was announced as he sat next to portraits of his late mother and grandmother.
''As far as just being excited and just being happy and ready to go and ready to work and ready to get there as soon as possible, those emotions were overwhelming with just my mother and grandmother being there,'' Edwards said. ''I mean, it was just a dream come true and just a blessing.''
As expected, James Wiseman went No. 2 to the Golden State Warriors and LaMelo Ball went No. 3 to the Charlotte Hornets.

The Golden State Warriors have something bright to look at after the stinging news of another leg injury to sharpshooter Klay Thompson.
Wiseman is a 7-foot-1 center and was the top player in high school coming into college. He averaged 19.7 points and 10.7 rebounds in three games for Memphis before the NCAA before suspended him.
He brings steady interior presence which the Warriors badly need since they prefer to fire from rainbow country. Wiseman will be expected to be the only guy in the paint as he crashes boards and provides second chance points on top of his own shot-creating abilities.

Another expected pick was LaMelo Ball going 3rd. At long last, the youngest of the Ball brothers has hit his final stop in a lengthy basketball journey which included pro stints in Lithuania and Australia.
''I feel like I can go out there and play basketball,'' Ball said. ''I feel like I was born to do this,'' he added.

No. 3 and 4 were forwards galore as Patrick Williams of Florida State and Auburn's Isaac Okoro went to the Chicago Bulls and Cleveland Cavaliers respectively.
Onyeka Okongwu, who has been drawing a lot of comparisons to Bam Adebayo  went No. 6 to the Atlanta Hawks.
Dayton forward Obi Toppin, another hyped prospect went No. 8. The Brooklyn-born forward is now closer to home as he was selected by New York Knicks.
''I'm from New York, that's why it's important,'' Toppin said. ''Me repping my city, it's amazing," he added.
Israeli Deni Avdija went No. 9 to the Washington Wizards. It might be a strange fit knowing that they are investing heavily on Rui Hachimura's development and meshing with the returning John Wall.
This one is probably a possible Orlando Magic move where they draft a player they don't have plans for just so the others can't pick him.
The San Antonio Spurs picked picked Devin Vassell at No. 11. It was the first time the team picked in the lottery since Tim Duncan in 1997.
Tyrese Haliburton, who probably wins most fashionable for a virtual NBA draft went No. 12 to the Sacramento Kings.
Cole Anthony wrapped up the lottery selections as he was selected by the Orlando Magic at No. 15.
For more SportNuz, click here for the latest updates.