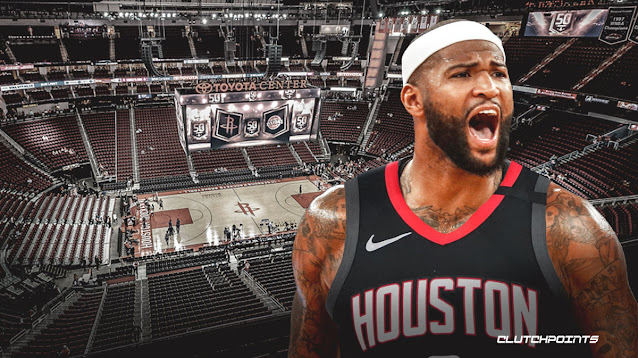 The Houston Rockets is making steps towards moving away from its small ball lineup as the team signed DeMarcus Cousins.
The one-year deal is for a veteran's minimum, and is non-guaranteed as the team is bound to pay the luxury tax for the first time under owner Tilman Fertitta.
Cousins will be entering the 2020-2021 season with uncertainty as he spent the entire last season recovering from a torn ACL.

The Rockets have been loading on big men as of late after their small-ball experiment didn't go as planned last season.
Together with Cousins, the team also acquired former Detroit Pistons big man Christian Wood in a sign-and-trade. These moves are going to beef up the interior.
Last season, the Rockets relied more on shooting than rim protection. They used forwards Robert Covington and P.J. Tucker as their defensive anchors as they set the NBA record for most 3-point attempts per game from a team.
Now that Covington has been traded to the Portland Trail Blazers and Tucker is back to his normal duty, it's intriguing to see how Cousins will fit in all this.

Will Cousins resurrect his career in Houston?

Cousins has always been a risky pick up during his healthier days. People intentionally ignored his talents because of his volatile attitude.
Despite all this, it is still worth noting that a healthy DeMarcus Cousins always outperformed Anthony Davis both separately and when they were together in New Orleans.
Now that Cousins is in Houston, he has a chance to have a fresh start as he now has legitimate scorers with him in James Harden and Russell Westbrook.
He always had to carry the load but he won't be expected to with the Rockets.

What about Harden and Westbrook?

The two former MVPs have been pushing for trades as of late. Though there aren't much takers for the two, it would be unfair to the team now that they added legitimate talent to help them out.
Despite now having a list of injuries in his record, Cousins still has the skillset that will help boost the Rockets' chances of contending. In fact, he played injured during the 2019 NBA finals for the Golden State Warriors but was still carrying the team and keeping it alive despite the losing effort.
All Cousins has to do now is to stay healthy because he isn't going to have much workload anymore unlike in Sacramento and New Orleans.
For more SportNuz, click here for the latest updates.
Demarcus Cousins Free Agency Houston Rockets