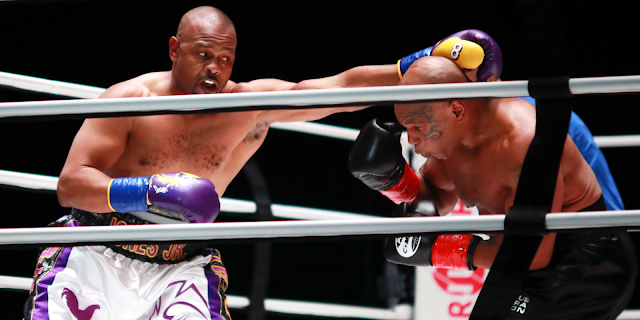 Mike Tyson and Roy Jones Jr. put on the show despite limitations that were supposed to make the fight boring.
The two former champions showed that they still have the moves that made them stars in their heyday as the fought to a draw in their exhibition fight on Saturday in Los Angeles.

It was an eight-round contest between two of boxing's biggest names in the 90s.
Tyson showed that he still packs power in his punches at 54 as he picked his spots with his signature peek-a-boo offense.
Jones also used his signature movement but appeared slowed down by age. "The body shots definitely took a toll," he said.
The bout was scored remotely as the World Boxing Council formed a set of judges rather than assign ringside ones.

Biggest takeaways from Tyson vs Jones

Tyson has shown that he's still got it. He has been doing it as seen in a bunch of training videos in preparation for the fight
"I'm used to doing it for three minutes," 54-year-old Tyson said of the shorter rounds. "Sometimes, that two minutes felt like three minutes. I'm happy I got this under my belt to keep doing this and go further," he added.

Jones Jr, 51, was slowed down by Tyson's body shots. Although he still has his signature footwork and movement but it looked sloppy as he hasn't fought in an actual ring since 2018.

Of course, Tyson again stayed firm with being retired from professional boxing. He said that he'd rather do exhibitions because it's humanitarian and it was "helping people."
For more SportNuz, click here for the latest updates.