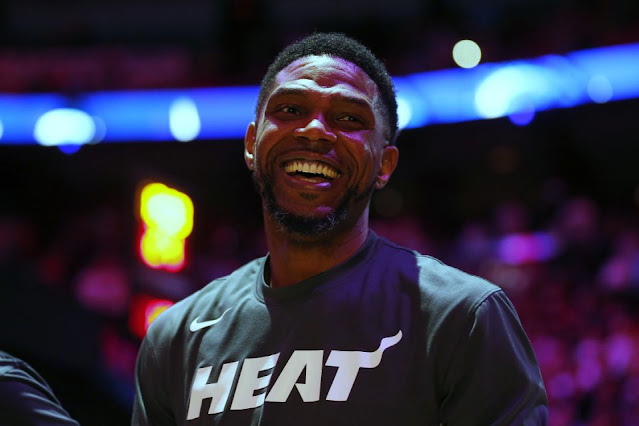 The Miami Heat has leaned on mentorship as their key to success for almost two decades. Veteran presence has been their lifeline even when they aren't on a rotational capacity.
18-year veteran Udonis Haslem announced on Friday that he will return for an 18th season with the Miami Heat. The Heat reached the NBA Finals last season and he feels like the job isn't done yet.
“I am the Miami Heat. The Miami Heat is me,” Haslem said.
“Just understanding what my value is and understanding that these guys really still value what I bring to the table. With that being said, another opportunity to win another championship in Miami," he added.

Haslem has made a positive impact on and off the court for several years now. He was a reliable go-to for mid-range jumpers and crashing the boards during his prime, and a mentor to the young stars during the latter part of his career.

“I really didn’t understand how impactful I was to these guys until I had the opportunity to be in the bubble and spend as much time as I had to spend with these guys. I really understood that these guys really respond to me, man. That was huge for me,” Haslem explains.

Haslem is expected to sign a one-year, $2.6 million deal with the Heat for the 2020-21 season which will start in December.

The Florida native has been with the Heat since his first NBA season in 2003. He will now be the oldest player in franchise history when next season begins.
Haslem will join Kobe Bryant, Tim Duncan, Dirk Nowitzki, John Stockton, and Reggie Miller as one of just six players in NBA history to play for one team for at least 18 seasons.
They 40-year old isn't ready to quit just yet. Even Heat coach Erik Spoelstra is uncertain how long the veteran will stay as he refuses to put a limit to his playing career.
Winning his fourth NBA title would have been a good sendoff but the Heat fell short to eventual champions Los Angeles Lakers. Haslem feels he still has unfinished business.

“I didn’t want to go away telling these guys that I could help them win a championship and not really doing it. Jimmy made a commitment, Bam made a commitment, everybody made a commitment and we didn’t get it done." Haslem tells reporters
The job is not finished. We got work to do," he concluded.
For more SportNuz, click here for the latest updates.
Miami Heat NBA Udonis Haslem