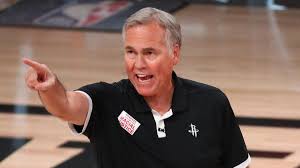 The Coaching exodus continues, from the mutual separation of Billy Donovan and the Oklahoma City Thunders, to the firing of Nate McMillan in Indiana and Brett Brown in Philadelphia.

Now it was announced that Mike D’Antoni will not renew his contract with the Houston Rockets.

D’Antoni’s contract expired upon the elimination of the Rockets at the hands of title contenders Los Angeles Lakers falling 4-1 in the Western Conference Semi-Finals.

The loss may be disappointing for D’Antoni and the Rockets organization, but it can be argued that the partnership had a successful run.

If you look at it in a different perspective, one could say that his tenure was a success if not only due to the dominance of the Golden State Warriors and now the rise of the LeBron-led Los Angeles Lakers.

What’s next for D’Antoni

Reports suggest that he might be heading to Philadelphia as he had a good relationship with the organization and the players during his stint in the 2015-2016 season as an associate head coach.

Upon his appointment as associate head coach of the Sixers, they were able to snap a losing streak and actually string a couple of wins during the early years of the “process”.

Will D’Antoni be a good fit as the Sixers coach? Only time will tell, if they actually hire him.

What happens with the Houston Rockets now?

D’Antoni was able to establish a unique brand of attacking basketball with the Houston Rockets the NBA has never seen before.
It would not be easy for the next head coach to adjust with the players at his disposal.

There are a lot of free agent coaches to replace D’Antoni, from Nate McMillan to Billy Donovan or even Brett Brown.

But the question would be, would they fit with the current squad especially built for small ball and D’Antoni?