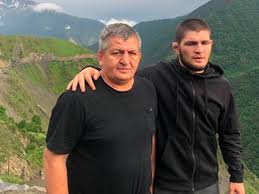 Abdulmanap Nurmagomedov, the father and trainer of Khabib Nurmagomedov, died after a series of complications from COVID-19 over the past two months, Russian outlet RT reported Friday.

Per RT, Abdulmanap died due to brain injuries caused by a stroke after fighting the coronavirus disease. He suffered a heart attack in May and was a in a coma. Khabib told RT on June 23 that his father no longer had COVID-19 but his “condition is still serious.” Other family members have died from the virus, the UFC lightweight champion said.

Relatives are already arriving his his native village of Kirovaul for a potential burial Friday, local leader Ilyas Khaziev said via RT.

Abdulmanap was initially hospitalized in April in his home of Dagestan, where Khabib has been during the COVID-19 pandemic, with suspected pneumonia. He was transferred to Moscow in serious condition for further treatment.

The pneumonia led to a heart attack and he was placed in a coma those complications.

Though he initially tested negative for COVID-19, at some point in that time he tested positive, Khabib said in an Instagram video on May 18 confirming his father was hospitalized. He was in critical condition and UFC stars gave their support to the family.
Complications from COVID-19

Khabib updated his father’s status 10 days ago for Channel One Russia, saying it was still serious. He said his father was still in intensive care and that while he no longer had COVID-19, it negatively impacted his heart and kidneys.

“He recognizes me, but there is no [verbal] communication, because he is under the hospital devices. Every day, I visit him for half an hour, hold his hand, talk, he gestures to understand that he recognizes me.”

A father, a trainer, and a mentor

Abdulmanap was Khabib’s long-time trainer, helping him to a 28-0 record in UFC and the lightweight championship. The two are reportedly very close.

Abdulmanap, a specialist in wrestling and sambo, has also trained other talent out of Dagestan, Russia, and gained a reputation for his championship contenders. He’s unofficially known, per RT, as the “Father of Dagestan MMA.”