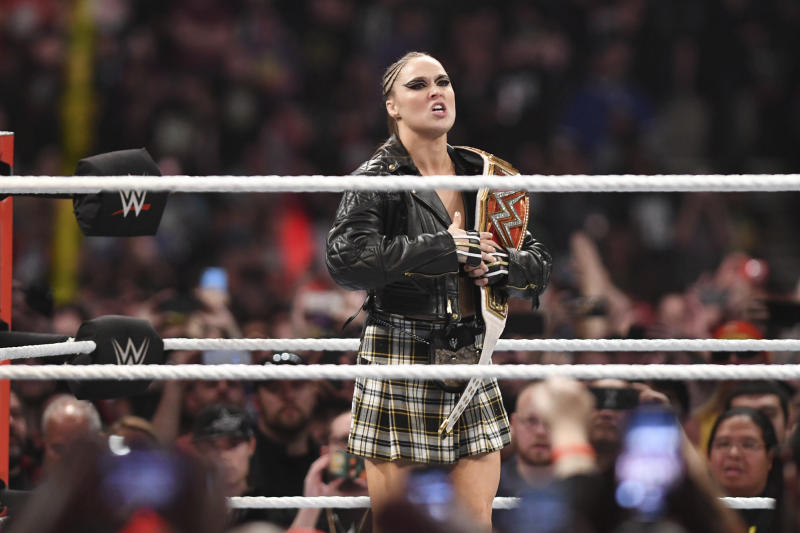 Ronda Rousey seems like she's crying about something again.

No, it's not her loss to Holly Holm. It's in her newfound profession as a top-level WWE superstar.

At first, it looked like Rousey was enjoying her time performing for WWE. She was actually enjoying her run with the company except for one thing..

The former UFC women's bantamweight champion was a guest on Steve-O's “Wild Ride” podcast when she said those words.

Rousey was candid when asked about her experience with sports entertainment fans.

“What am I doing it for if I’m not being able to spend my time and energy on my family, but instead spending my time and my energy on a bunch of [expletive] ungrateful fans that don’t even appreciate me?” Rousey explained.

“But, at the end of the day, I was just like, ‘[expletive] these fans, dude.’ My family loves me. They appreciate me. I want all of my energy to go into them,” Rousey added.

Despite her issues with the fans, Rousey managed to show her love and appreciation for the sport. “The thing is, I love performing. I love the girls. I love being out there," she said.

A real-life heel turn for Rousey?

With another former UFC champion in Brock Lesnar showing blatant disrespect for the WWE through a series of incidents, Rousey might be treading the same path.

Rousey started losing motivation and interest in cage fighting after her first loss to Holm in 2015. Another devastating loss to Amanda Nunes the following year and she was out for good.

She suddenly decided there's bigger money for her in sports entertainment where her close friend Shayna Baszler went ahead before her.

With a gimmick borrowed fromlate professional wrestling icon Rowdy Roddy Piper, Rousey was immediately shot to the top of the WWE ranks from 2018-19.

Though decent in the ring, it was obvious that it was her star power that made her a headliner despite others that were more deserving.

Rousey doesn't have bad things to say about the business. She actually enjoyed the spectacle and the bond she's formed with the rest of the women's roster. She was actually a liked person backstage.

“I love the WWE,” Rousey told Steve-O. “I had such a great time. I love all the girls in the locker room. Running out there and having fake fights for fun is just the best thing. I love choreography. I love acting. I love theatre. Live theater and some of the last forms of live theatre,” Rousey shared.

She just felt like the grind was no longer worth it at this stage of financial stability.

“If I did all of the live shows, I was only home a day and a half a week,” Rousey continued. “It was just not worth it for my family because we were eliminating all of our expenses and living this lifestyle, we didn’t need it. We didn’t need the money,” she said.

Despite the fan reactions, Rousey deserves to be in the WWE and will surely be an important part of storylines in the Women's Division.

There's still the rivalry of which Four Horsewomen group is better right? Can we get at least a War Games match for this?

Should Ronda Rousey return as a full-time performer in the WWE? What's the score with regards to her professional wrestling career? Let's talk about her on the comments below.