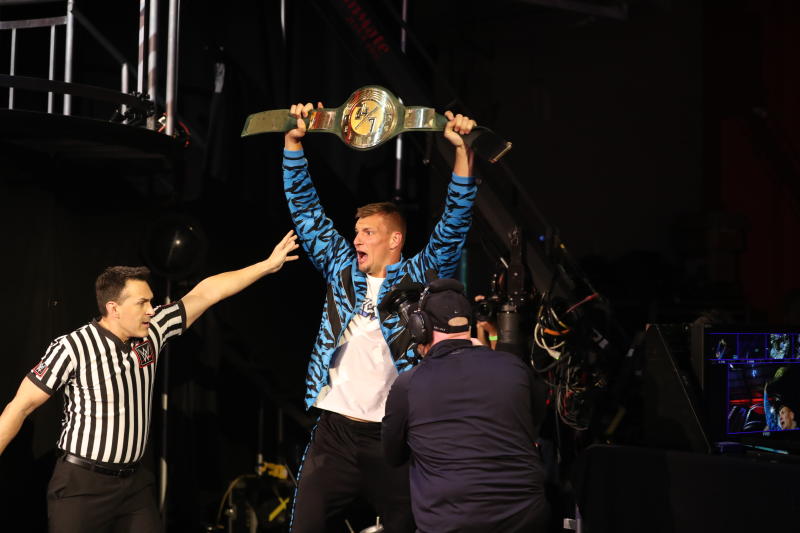 Rob Gronkowski has just started his first full gig with the WWE and he's become a champion again.

Gronkowski won the title during the second night of a two-part WrestleMania event held at the WWE Performance Center.

He first saw an opportunity on the first night of hosting WrestleMania where then 24/7 champion R-Truth turned up during one of his hosting segments with Rawley.

The retired NFL tight end nearly picked up the pin but Rawley pulled him off to secure the pin and the victory himself.

“I’ve won three major championships in my life and that’s cool and all, but that’s in the past,” Gronkowski said.

“I wouldn’t mind winning the 24/7 title before the end of tonight. I’m here at WrestleMania, I want that title,” he declared.

Gronkowski was in another segment following the last man standing match between Edge and Randy Orton when Rawley was chased by the rest of the locker room.

He would then dive off his hosting perch onto the swarm of competitors then pinned a downed Rawley to win the championship before running out of the Performance Center.

Titus O'Neill then took over hosting duties after.

"The Gronk" as a full-time performer?

The WWE 24/7 championship was introduced in 2019 as the modern day reincarnation of the Hardcore championship which could be won, defended, and lost any time and anywhere.

It has mostly been used in comedic segments with occasional defenses occurring in actual wrestling matches. Gronkowski is one in several non-wrestlers who won the title.

"The Gronk" has made WWE appearances in the past including WrestleMania 33 where he helped Rawley win the Andre the Giant Memorial Battle Royal by tackling Jinder Mahal.

WrestleMania 36 is the second time Gronkowski played a role culminating into a WWE storyline.

Should Rob Gronkowski be a full time WWE performer or is he better off as a part timer? Tell us your thoughts in the comments section.