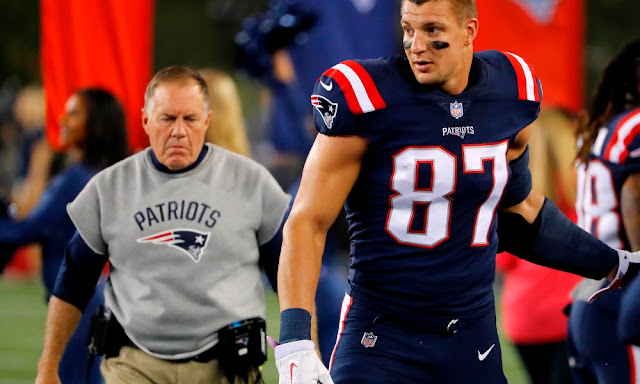 It turns out "The Gronk" wants his own "The Last Dance."

Rob Gronkowski has strengthened rumors of a potential NFL return as he insisted that he is "not totally done" with football.

Rumore has it that the the three-time Super Bowl champion, who started transitioning into pro wrestling storylines might join fellow New England Patriots legend Tom Brady and play for the Tampa Bay Buccaneers.

Gronkowski has been busy since retiring in March last year, making numerous TV and public appearances.

Will Gronkowski come back to the NFL?

Gronk is quite busy as of late. The 30-year-old just won the WWE 24/7 Championship at WrestleMania earlier this month.

The terms of his WWE contract weren't fully disclosed, which means a possible full-time career change isn't certain yet.

Buccaneers general manager Jason Licht said that he has "no idea" if the former New England tight end will un retire.

"The day that I retired, within 24 hours there was already rumours that I was coming out of retirement," Gronkowski humorously said.

Gronkowski surely has something interesting going on with his new gig right now as a part-time WWE superstar. He has not wrestled a single match for the promotion yet but might be involved in sporadic squashes in the future.

If there's one thing that's for sure, nobody is allowed to chase him around for that 24/7 title once he is in-game on a football field.

Will "The Gronk" play in the NFL again? Should he stay retired and enjoy his newfound sport? Let's talk about it in the comments section.