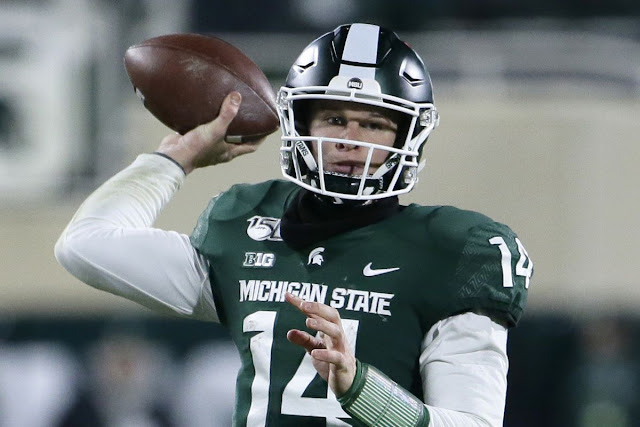 Filling in the void that Tom Brady leaves is a long shot but at least they are ready to think about the future.

New England chose not to select a quarterback in the 2020 NFL draft as head coach Bill Belichick said the team would be signing an undrafted rookie instead.

It isn't a necessity anyway as the team still has Jarrett Stidham and Brian Hoyer.

The Patriots made their plans a reality after signing Michigan State quarterback Brian Lewerke. His agent Mike McCartney announced the signing.

Lewerke redshirted his first season at Michigan State in 2016 before starting out the next three years. He finished his college career by completing 260-of-436 passes for 3,079 yards, 17 touchdowns and 13 interceptions.

His best year came in his redshirt sophomore season in when he had 20 touchdown passes while also running for 559 yards and five scores despite an injured throwing shoulder in the second half of the season.

Lewerke broke records as the only player in his school's history to throw for 8,000-plus yards and also rush for 1,000 plus. He finished with 8,293 passing and 1,255 rushing yards.

Belichick will have to see which quarterback he will trust to carry the team moving forward.

It looks like a trial and error stage at this point. Brady's shoes aren't easy to fill.


Who will be the New England's starting quarterback? Will Lewerke start next season once the NFL resumes? Leave a comment and let us know what you think.