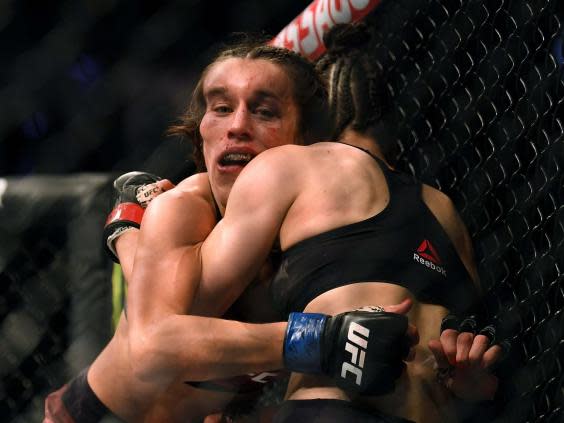 Joanna Jedrzejczyk looked like golf balls were about to sprout of her forehead after a brutal  strawweight title battle with Weili Zhang at UFC 248.

The former champion from Poland lost via split decision against UFC's first Chinese champion, where she was left with an enormous hematoma on her face following the fight.

Both Zhang and Jedrzejczyk were taken to hospital after the slug-fest. The latter suffered a greater deal of damage but she didn't let it get in the way of sportsmanship as she congratulated her opponent on the win.

“It doesn’t matter, I carry myself as a champ with the belt or without,” she said. “I was very proud of her, congrats Weili,” Jedrzejczyk said.

The Chinese Zhang and the Polish Jedrzejczyk (now 16-4) went back and fourth trading brutal strikes throughout five rounds to the delight of the crowd in attendance.

The fight was completely exciting compared to the dull middleweight title fight in the main event featuring Israel Adesanya versus Yoel Romero.

Two judges scored the bout 48-47 for Zhang while one judge scored it 48-47 for Jedrzejczyk. Zhang could not hide her delight after hearing the final decision.

“I had a long way to get here,” said Zhang, who had to move her training camp out of China due to the coronavirus outbreak. “It was very serious, but we made it. I’m so happy now.”

Is Zhang vs Jedrzejczyk the early "Match of the Year" candidate? Did it deserve to be the main event instead of Adesanya vs Romero? Tell us what you think.