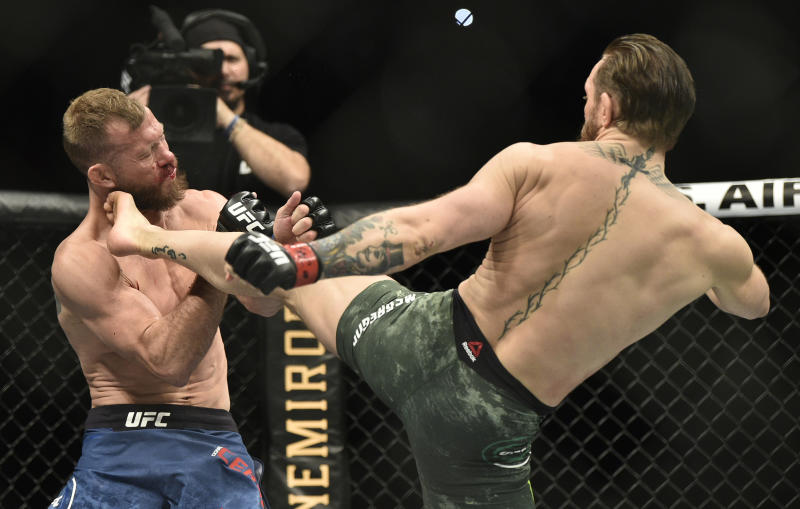 Many doubted Conor McGregor with a lot of things: his three-year winless streak. lis lackluster performances at welterweight, and his motivation at this stage in his career.

McGregor silenced all the critics as he showed what he is actually capable of after finishing Donald “Cowboy” Cerrone in the main event of UFC 246 on Saturday at T-Mobile Arena.

All the Irishman needed was 40 seconds.

The win was McGregor's first since winning the UFC’s lightweight title against Eddie Alvarez on Nov. 5, 2016. He finished Alvares in the second round of that fight.

McGregor dropped Cerrone with a kick to the head that connected with a thud. He then followed up but referee Herb Dean decided it was enough once Cerrone just turtled up to defend himself against the powerful blows.

“They can give fighters made up belts, but they can’t give fighters knockouts across three weight divisions,” McGregor said in celebration.

New offense added to his arsenal

McGregor got creative with his offense. After missing a huge left hand, he clinched Cerrone and used his shoulder to shrug Cerrone in the face, appearing to break his nose. Cerrone admitted he was stunned by the innovation.

“One hundred percent [it surprised me],” Cerrone said. “I’ve never seen anything like that.”

The former featherweight and lightweight champion came in and fought like the man who quickly climbed the ranks enroute to becoming a world champion in 2015 and 2016.


A huge target on his back

McGregor said he plans to stay at the 170-pound division. There are also a lot of fighters who want him.

The good thing about the win is that McGregor didn't absorb serious damage in the fight, that he can immediately fight again in a month or two. McGregor himself said that if he came out of this fight unscathed, he’d like to be on the UFC 248 card in Las Vegas in March.

The former two-division champion has started the year right. Knowing McGregor, that means momentum is on his side.

Will Conor McGregor fight again in March? Who will face him if that happens? Leave a comment and tell us what you think.