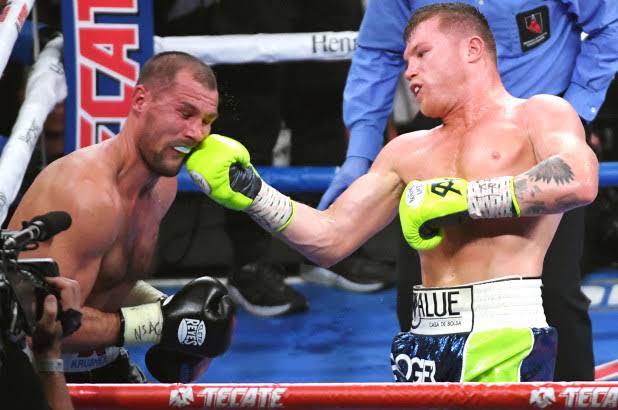 The bigger they are, the harder the fall.

Saul "Canelo" Alvarez proved just that n his bout Saturday at the MGM Grand Garden as he knocked out the bigger Sergey Kovalev to win the WBO light heavyweight title.

Canelo walked down Kovalev and stopped him with a chopping right and a crushing left hook to the jaw at 2:15 of the 11th round. The career light heavyweight struggled to find rhythm as he was behind two scorecards prior to being stopped.

Promoters and the broadcast team had to hold the main event causing a 90-minute delay until after UFC 244 in New York concluded.

Alvarez became only the 20th boxer in history to win championships in four weight classes. He also became the fourth former super welterweight champion to go on to win a light heavyweight belt.

Only Hall of Famers Sugar Ray Leonard, Thomas Hearns and Mike McCallum have made such feat.

Alvarez wasn't bothered by the size disadvantage. He walked down the bigger Kovalev, who was nicknamed “Krusher” for his punching power that knocked 29 light heavyweights in his first 38 fights.

Kovalev made use of his advantages early on as he hoped to jab his way to the win and was out-throwing Alvarez by a large margin. However, Kovalev felt every significant blow Alvarez landed on him

“He just got caught and there’s nothing you can do about it,” Kovalev trainer Buddy McGirt said after the fight.

Alvarez seemed comfortable even at light heavyweight as he outgunned Kovalev. Even the heavy stinging jabs couldn’t keep Alvarez off. The jabs weren't even getting through the high guard often enough.

With another impressive win added to his record, Alvarez is proving he is the best in this era.  He’s next mission is to be one of the best who ever.

Where does the win rank in a list of finishes for Canelo? Is he this era's greatest? Leave a comment and let's talk about his latest win.