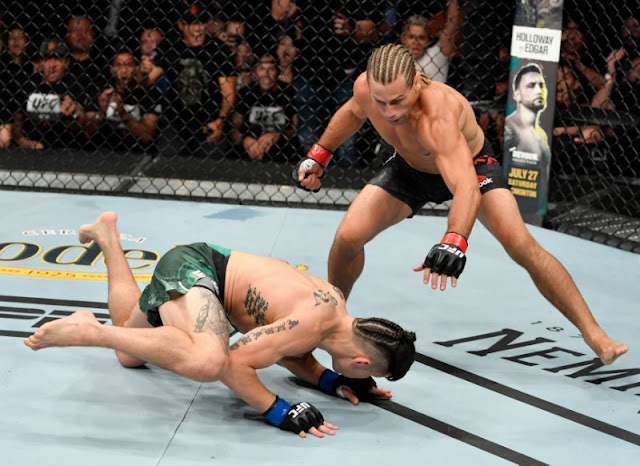 Urijah Faber came back with a strong statement!

The "California Kid" came out of retirement and scored a first round TKO victory over Ricky Simón Saturday in his hometown of Sacramento.

Faber might get an instant title shot though as dual-weight champion Henry Cejudo challenged him.

Faber made quick work of a significantly younger Simón who is 14 years his junior.

He began the fight with his hands low and paid for it as Simón landed a stiff jab followed by a leg kick. Faber was able to regain his footing and landed an overhand right that dropped Simón

Faber followed up with ground strikes prompting referee Mike Beltran to stop the fight. Simón questioned the quick stoppage at first but shook hands with Faber, after.

With the win, Faber improves his record to 35-10 while Simón’s eight-fight win-streak is snapped as he drops to 15-2.

Faber is currently on a two-fight win streak with the other being his previous victory over Brad Pickett in his supposedly retirement fight on December of 2016.

Armed with a new purpose, it seems as though Faber has no intention to retire again just yet, especially as  Henry Cejudo keeps calling him out in recent weeks.

The multiple-time title challenger can choose between the flyweight and bantamweight title to challenge for with the latter being more feasible.

All we have to wait for now is an official announcement.

Is Urijah Faber indeed back for good? Will a title fight be next for the "California Kid?" Let us know your thoughts on in the comments section below.