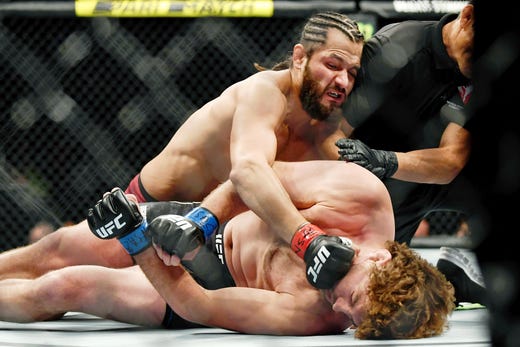 Jorge Masvidal's career as an MMA journeyman was highlighted by a history-making knockout Saturday night in Las Vegas.

"Gamebred" hit a flying knee and followed it up with two hard punches to seal the fate of a once unbeaten Ben Askren.

It only took five seconds for Masvidal to make history.

Exploded from the start

Masvidal started out on an unorthodox stance as he was preparing for the referee to signal the contest.

Two seconds later, Masvidal came sprinting and his knee came in contact with a shooting Askren's skull. "Funky" was out before he could even shoot for a takedown.

The loss is Askren’s first in his decade-long career as he drops to 19-1. Masvidal improves to 34-13 and is eyeing title contention.

The buildup makes it more dramatic

The two were going back and forth beefing on social media which heated things up whenever the two would cross paths in person.
Askren went as far as to suggest that Masvidal didn’t understand Askren when he addressed him in English. In return, Masvidal promised to end Askren’s career.

“That dude was talking wild, man,” Masvidal said postfight. “I had to show him that there’s consequences," he added.

Masvidal would then switch gears as he thanked his family and coaches and teammates. He would then call for a welterweight title fight after.

Where does Masvidal's KO win rank all-time? Tell us how impressed you were with the performance.