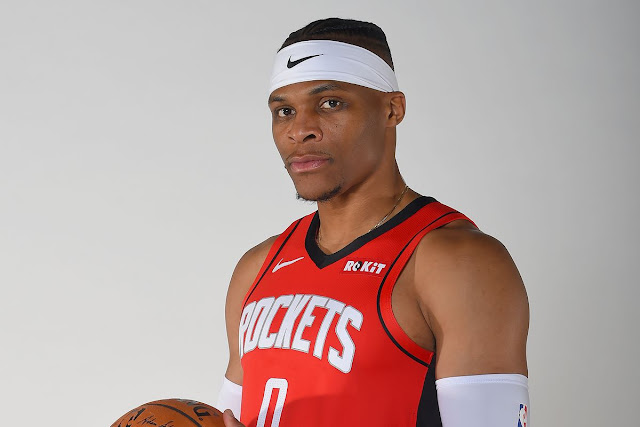 Russell Westbrook in a different uniform is something that will take some time for us to get used to.

For the past 11 seasons, Westbrook donned the blue, sunset, and yellow. Now though, we are going to see an awkward sight as he wears the red and white.

The former MVP was introduced in Houston on Friday after the Rockets acquired him via trade in exchange for Chris Paul and draft picks.

Not only did he make his first appearance as part of the Rockets organization, he also wore its uniform for the first time.

General manager Daryl Morey beamed at the idea that the Russell Westbrook-James Harden reunion will be as successful as how it was in 2012.

“Obviously, we’re here for one reason only, to take that next step that we’ve been trying to do for the last few years,” Morey said.

Both Westbrook and Harden have a common goal of winning their first championship. They had the taste of the NBA finals already when they played together in 2012 and they look to repeat that feat.

“To be able to win something you have to be able to sacrifice some parts of your game and we both understand that,” Westbrook said.

Westbrook has been accused of "stat-padding" in the past as he averaged a triple double in the past three seasons.

If Westbrook's words are to be taken seriously, this is a dangerous Rockets team we are looking at.

introduced in Houston on Friday after being traded from the Thunder for Chris Paul and draft picks this month. General manager Daryl Morey beamed as he sat next to Westbrook when he made his first appearance as a Rocket.

People always forget that this tandem has worked in the past. Harden may have not broken out as a bonafide superstar yet but his play was already the same.

If only Kevin Durant had not been the number one guy in Oklahoma City during that time, we could have seen more of this duo.

An MVP award each later, these two ball-dominant guards are going to play hot potato with the ball rather than deprive each other of it.

As proof, here's what Westbrook has to say:

Harden hasn't spoken to reporters yet about what is to come. But he attended the press conference where he was seen smiling and chuckling at some of Westbrook’s comments and jokes.

Westbrook was in a lighter mood when he showed up in Houston. It looks like he feels refreshed rather than the toxic culture that he may or may not have contributed to in Oklahoma.

When asked what he wished people knew about him he quickly responded with: “that I’m a nice guy.”

Westbrook plans to play with the same intensity and attitude that he’s played with throughout his career.

The reunion with Harden is the closest he has to winning his first championship in quite some time. Their chemistry goes way back since both were already friends since they Westbrook was 10.

“I thought it was the best decision for me and my career right now,” he said. “And to be able to reunite with my brother, a friend, to be able to do that is something that you dream about and you live for,” Westbrook said.

If all what Westbrook said at the press conference will come true, then the Rockets might be starting another dynasty here.

Is Russel Westbrook a good fit in Houston? Did you like seeing him in a new uniform? Leave a comment and let us know what you think.