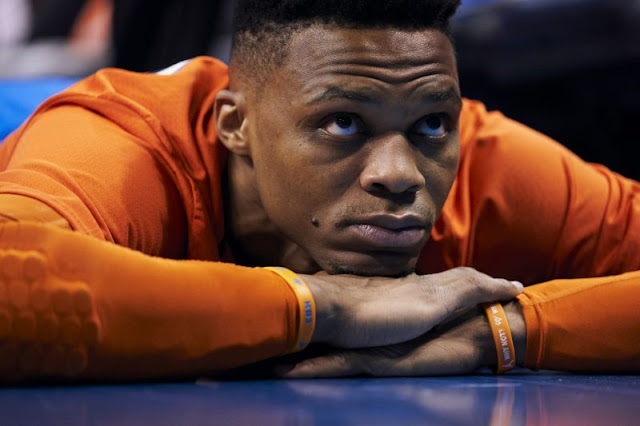 Paul George is gone. It's time to move on but it appears Russell Westbrook wants to as well.

The Oklahoma City Thunder star met with general manager Sam Presti over the weekend to discuss his future. The two sides are now “receptive toward trade calls.” according ro sources.

Westbrook has called Oklahoma City "home" for his entire 11-year NBA career. Now the 2017 Most Valuable Player might be heading to a new one by the end of the summer.

The dilemma however is that taking Westbrook will mean having to shoulder four-year, $171 million contract left on his supermax extension. That is definitely going to clog a great deal of cap space.

But a superb athlete and a triple-double machine like Westbrook might be of use to these five teams that will potentially take him in:

The Heat is Westbrook’s most logical landing spot per The Athletic’s Sam Amick. ESPN’s Adrian Wojnarowski also says that the Heat “appeals to Westbrook.”

Team president Pat Riley wants to build another star-studded team that can possibly win the team a championship before he retires. He already started making moves with a sign-and-trade deal to acquire Jimmy Butler.

Coach Erik Spoelstra has a knack for making these lineups actually work. Having two NBA players with a strong winning attitude will make his job easier.

The team does not have a highly expendable cap space for the next two seasons. This means Westbrook's huge contract might affect the team's ability to land a marquee free agent in 2021.

It's going to be a huge decision of whether they are willing to wait two years to possibly land the same amount of talent or pay Westbrook $47 million in the hopes that his surgically repaired knees can still carry a team in his age 34 season.

Riley has some assets to trade for Westbrook. Goran Dragic's contract is expiring while less-used Justise Winslow and Bam Adebayo need a place where they will be allowed to have bigger roles and thrive.

Having Westbrook on the team means Jackson goes back to the bench and the latter might not be a fan. The two will require mending fences as the two had beef with one another back when Jackson was with the Thunder.

Derrick Rose is arriving to Detroit as well. As much as he has been more of a role player lately, it might not favor the entire Pistons' backcourt to take the bump for Westbrook

Both Griffin and Drummond are both mega deal-type of players but based on their performance in this year's playoffs, they are not good enough to be called title contenders.

Detroit has the same dilemma as Miami, wither to wait two years or pay Westbrook $47 million in an unsure hope of high reward.

The Pistons may have less cap space but what they have are future first-round selections that might pay dividends for them.

Michael Jordan can use some of his athletes to represent his team. Westbrook is the highest-profile active Jordan Brand athlete right now which puts him in good terms with "His Airness."

Jordan has been watching Westbrook since his days at UCLA. He even tried to trade up during the 2008 NBA Draft to get Westbrook.

Unfortunately, Presti sees the same thing as Jordan and was not willing to part with the No. 4 overall pick. Charlotte have to wait for three years before being able to draft a franchise-caliber point guard when they drafted Kemba Walker in 2011.

Walker is now going to the Boston Celtics which has cleared a ton of room for Westbrook's remaining $171 million price tag.

It's definitely going to be eleven years in the making for Jordan and the Hornets if they could get Westbrook. Good thing is he is now a proven commodity with eight All-Star appearances and an MVP award.

Charlotte has has expiring contracts as well. They could trade those contracts and use the cleared roster slots to sign whoever Westbrook wants to play with rather than rely on what the GM gives him.

The Houston Rockets' backcourt is already loaded with two headstrong All-Star guards. It would have been only one had James Harden not been freed from Westbrook’s shadow in OKC.

Despite definitely winning that trade deal by a landslide, Houston GM Daryl Morey still seems to be interested in playing his star alongside Westbrook according to ESPN’s Tim MacMahon.

Sure, Westbrook’s game might free Harden from some of the extra things he has to do on top of his proficient scoring. He scores on drives, rebounds, dishes out assists, and is a more focused defender than Harden

The question is: how does it affect the team's overall chemistry?

A potential trio of Westbrook, Harden and Chris Paul is surely going to be a three-headed monster playing small ball but the latter reportedly wants out.

With that said, dealing Paul for Westbrook straight up would be an offset. Paul already has a reportedly “unsalvageable” partnership with Harden but history indicates that he is more professional than Westbrook when playing with teammates he does not like.

However, Morey's trade decisions are not felt till years later. Who would have thought trading their potential star Aaron Brooks will eventually bring them a James Harden?

The New York Knicks have already sealed their fate as the biggest losers of the decade next to the 2010 Brooklyn Nets.

They lost games on purpose just to fall two spots below in the draft while the New Orleans Pelicans got the luck of the draw without intentionally humiliating themselves.

The Knicks also lost on the sweepstakes for Kevin Durant and Kyrie Irving as the two chose to play on the other side of the bridge in Brooklyn.

Now they will have to wait until Dec. 15 when newly signed free agents are eligible to be traded in order to complete a deal for Westbrook.

Good news is that they could still land him even though late at the cost of some movable contracts and young talent. Let's just hope they still keep RJ Barrett.

Westbrook will be owed $38.5 million by whichever team he plays with next season. New York fans will love how Westbrook's attitude fits the culture of Madison Square Garden.

Will Westbrook play for a new team next season? Comment down below where you want to see him play.