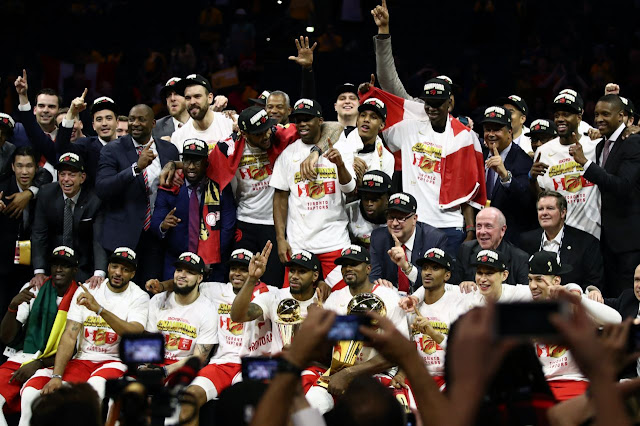 An NBA title finally goes up north as the Toronto Raptors win the NBA championship.

It took time for it to sink in for basketball fans who got used to the Toronto Raptors either getting eliminated early or getting swept deep into the Playoffs.

Now Raptors fans can celebrate as their team won the final game of the 2019 playoffs in what could possibly be the end of the Golden State Warriors’ dynasty.

There was a lot of suspense. The team's 24-year Odyssey was temporarily delayed after a mad scramble for the ball just before the buzzer with the Raptors leading 111-110.

Draymond Green corralled the loose ball and called for timeout for the Warriors but unfortunately, they didn’t have any remaining. This constituted a technical foul shot and possession of the basketball for the Raptors.

Kawhi Leonard sank the technical free throw before heading to the line for two more after a foul on the ensuing inbound. Leonard sank all three.

Reserve point guard Fred VanVleet was the unsung hero for the Raptors the entire postseason providing a huge boost on both ends of the court.

It was the fourth quarter in game 6 of the NBA finals that VanVleet played the game of his life. He gave Toronto its biggest moments when the team needed it.

VanVleet finished the game with 12 big points in the final quarter, including three important three-pointers and three points at the line after getting fouled on a 3-point attempt.

Injury karma for the Warriors

The Warriors' championship run in 2015, 2017, and 2018 were convincing but still questionable. A star gets injured from an opposing team bound to beat them or at least give them a hard fought game.

They beat the Cleveland Cavaliers who lost Kevin Love and Kyrie Irving deep into the playoffs in 2015.

In 2017, they were facing the San Antonio Spurs in the Western Conference Finals when then-Spurs star Kawhi Leonard tweaked his foot in a bad fall. Leonard was declared out for the series later on.

The same happened against the Houston Rockets in 2018 when Chris Paul injured his hamstring and is unable to play in game 6 and 7 of the Western Conference finals. The Rockets were leading 3-2 but lost the series without Paul in their lineup.

Karma would hit them this year though as injuries plagued three of their five superstars. Kevin Durant is feeling the effects of an Achilles injury, Demarcus Cousins wasn't playing at a hundred percent while Klay Thompson had to leave the game after injuring his ACL on a drive in the third quarter.

Steph Curry, Draymond Green, and Cousins can only do as much without complete cohesion.

Green racked up 11 points, 19 rebounds and 13 assists while Andre Iguodala added 22 points to help push this game to the final seconds.


It was just the Raptors' time

Everything fell the Raptors' way the entire year. Holding the top seed and the best record in the NBA at one point, getting full commitment in terms of play from Kawhi Leonard, and sudden revelations from once benchwarmers, case in point: Pascal Siakam

Leonard knew his worth and wasn't ready to sell himself short. He proved to his former team why he was right all along as the Raptors turn out the winners of the DeRozan-Leonard trade.

“Thirteen years of NBA basketball. Couple years of college. A couple years of high school basketball. And to be able to say I'm a world champion, it makes me feel great. And to do it with the group of guys that we did it with is amazing, like it's just kind of still surreal. Kind of, it hasn't hit me yet," Lowry dramatically narrates.

Siakam is definitely going to win the NBA Most Improved Player award. He brought an excellent play during the regular season to greater heights come Playoffs.

The Cameroonian finished game 6 with 26 points, 10 rebounds and three assists, which were normal statistical lines for him all season long.

Even Fred VanVleet had good percentages as he did more what was expected of him on the floor. That includes cold-blooded dagger threes late into game 6.

The battle is not over in the Toronto Raptors' front office.

First, they have to make sure they have Leonard's long-term commitment. Second is making sure the rest of the supporting cast remains intact and happy regardless of what happens to their superstar.

As for the NBA draft on June 20, the Raptors only have one pick and it is in the second round at number 59. There is a chance they trade that pick with a reserve for cash up higher in the second round. That is if they don't decide to pass on the pick.

The top priority should still be to make sure Leonard stays for a chance to create a dynasty up north.

Let us all congratulate the Toronto Raptors for joining the list of teams with an NBA championship.