Kyrie or Kemba? Who must the Lakers pursue? 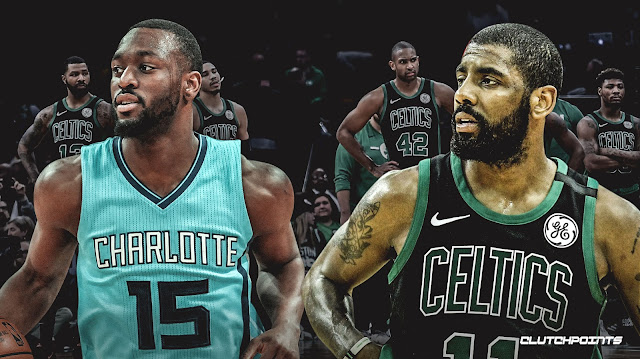 Kyrie Irving and Kemba Walker are both entering free agency this offseason and there is one team highly interested in their services: the Los Angeles Lakers.

Both belong to the top five point guards in the league and they also happen to come from the same draft class. The two had different career paths but the amount of individual talent is very close to an equal match.

The Lakers are on a different kind of rebuilding process after LeBron James struggled to convince the youngsters on his team that winning matters more than highlights.

Anthony Davis is now part of the Lakers lineup as the team unloaded some of its drama namely Brandon Ingram and Josh Hart. Unfortunately, a open-minded Lonzo Ball had to be part of that trade as well.

Management still has faith that Kyle Kuzma can be saved among all youngsters. But back to the point guard talk, who takes Ball's place?

Ball's strengths were his basketball IQ and willingness to create for his teammates. The Lakers got him initially for that and not his offense. Now the team is considering signing a ball-dominant offensive guard.

Both Irving and Walker are just that. But who must the Lakers pursue though? Both have mad dribbling skills, and excellent first step, a reliable jumper, and the ability to finish on the drive.

The two have been All Stars and been included in an All-NBA team during the course of their 8-year NBA careers.

Which point guard do the Lakers need though?

Kyrie played with LeBron in Cleveland. The two even won an NBA championship together in 2016.

The relationship went sour when Irving sought greener pastures and requested a trade to the Boston Celtics. He was a valuable addition to the lineup but proved detrimental at times especially as his teammates seemed to have more cohesion with him out.

It is also worth noting that Irving was not able to carry the Cleveland Cavaliers to the playoffs until LeBron arrived and had Kevin Love to create a deadly trio.

He wasn't around when the supposedly starless Celtics pushed the Cavaliers to the brink of elimination in the Eastern Conference Finals in 2018.

There's also a chance that Irving decides to be what he wants which is to be a solo star with the New York Knicks.

Irving's talent can be valuable anywhere but it's his ability to carry a team alone that is in question.

Bottom line is with LeBron and Anthony Davis in the Lakers' lineup, it's now a matter of statistical or historical legacy for Irving.

He just has to make a choice.

Kemba Walker is an interesting piece. He was there during the highs and the lows of a Charlotte Hornets team that relied on him to carry them since his rookie season.

It is worth noting that Walker was able to take the Hornets to the playoffs twice on his own with just role players and young relievers surrounding him.

Walker never had the luxury of a second superstar relieving him of all the scoring load. The closest he had was Lance Stephenson in 2014 and we all found out the ugly way.

New York is Walker's hometown and is open to playing closer to where he grew up. The Lakers though seem interested to compete in free agency for his services.

Despite Walker being an unrestricted free agent, sadly the choice might not be his.

Who fits the Lakers' lineup better?

Familiarity with how LeBron wants to run his offense is on Kyrie's side. Kemba has accomplished more for his team being its sole star than Kyrie was pre-Lebron's return to Cleveland.

In terms of offense, Irving works well when the ball starts on his hands whilst Kemba's shooting habits are more susceptible to a LeBron James kick out pass.

Kyrie's health issues even on an eased offensive load is a cause for concern while Walker has played a lot more games and getting hurt less despite the amount of work he had to put up in Charlotte.

LeBron James gets who LeBron James wants. The final decision is his since the Lakers planned to build around him in the first place anyway.


Should the Lakers pursue Kyrie Irving or Kemba Walker? Comment down below who you think is a better fit.